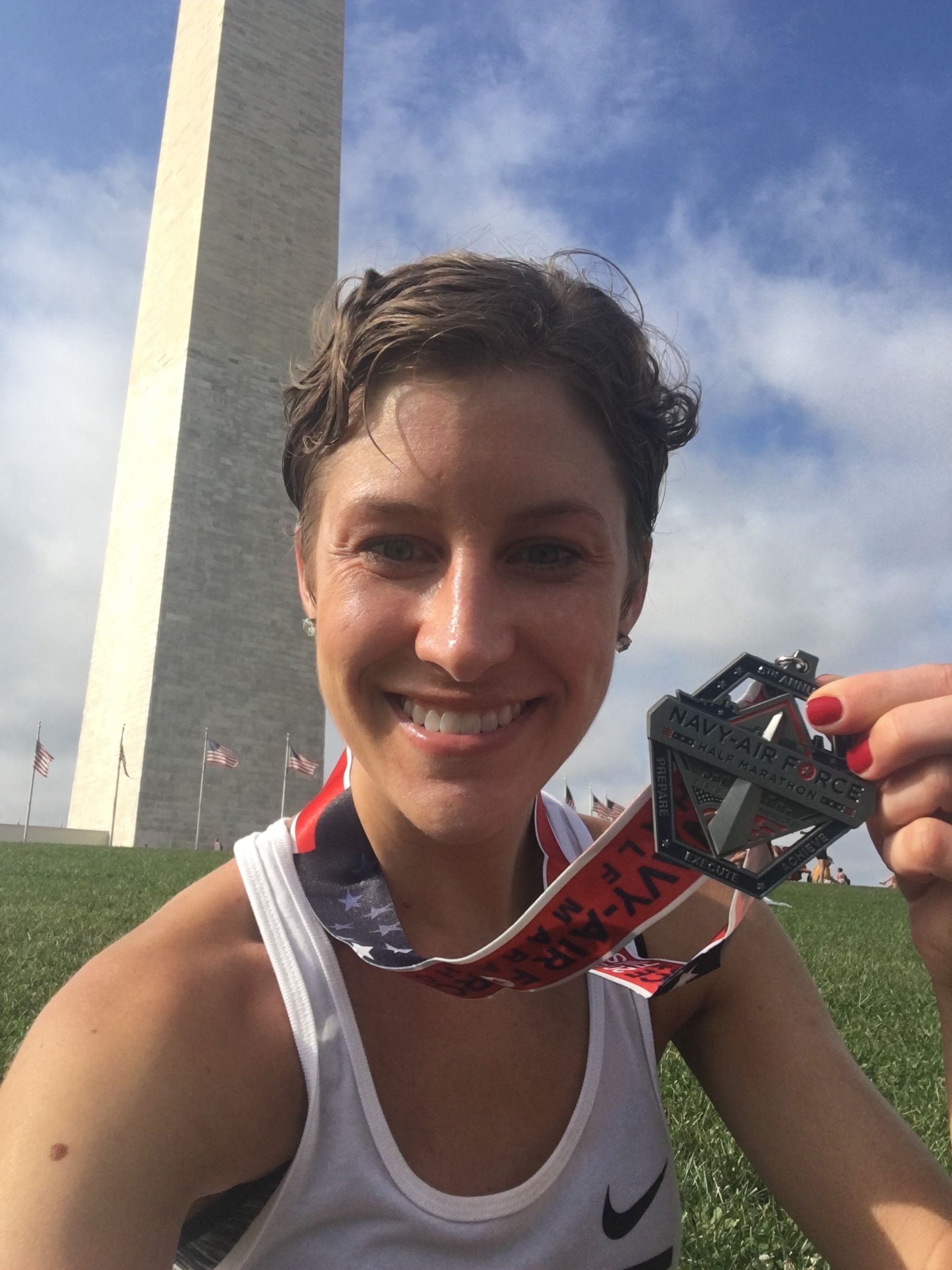 Lara Snead has always been a runner. A competitor since high school, Lara gradually quickened her pace and increased her stamina to the half-marathon distance.

Last June, at age 27, with a winning bib number from the lottery happily in hand, she set her sights on her first Marine Corps Marathon.

During her early training, her body sent her a signal. Chest pain and fatigue would be the first signs of a cancerous tumor growing around her sternum, and an enlarged lymph node near her collarbone confirmed it was Hodgkin lymphoma. Her first marathon would have to wait.

“It was completely shocking,” Lara said. “And I think it was the fear of the unknown that was the hardest on me.”

As a single woman living across the country from her family, facing this diagnosis alone was frightening. Almost immediately, her father flew in from Seattle and stayed to help her through that first month of treatment. Her doctors at Sibley Memorial Hospital in Washington, D.C., told her to expect about six months of chemotherapy – an exhausting regimen of 12 hospital-based infusions every other week – which would gradually kill the cancerous cells.

“I didn’t know how my body would respond, but I tried to look on the bright side every day. I was thankful we had caught it early, and I convinced myself that I would be okay. The nurses at Sibley would smile and call me a rock star for the way I handled it.”

“I was so lucky to have family and friends to go to treatment with; they made it bearable. They gave me something to look forward to. The only thing I missed was exercise. I couldn’t run to relieve stress, at a time when I was at the peak of stress in my life,” she said.

Lara began running again in January after deciding against radiation treatment. Her energy returned, slowly. At first, she could run a few hundred yards and, days later, a mile. In April, she ran the Cherry Blossom 10-miler, less than four months after chemotherapy.

“I decided to run with Team In Training because I wanted to help LLS raise money for cancer research, and help future patients like me.”

Since its inception in 1988, when a team of 38 runners trained together for the New York City Marathon and raised $320,000, TNT has raised more than $1.4 billion, trained more than 600,000 people and helped LLS invest more than $1 billion in research to advance breakthrough cancer treatments that are saving lives today. To learn more, go to www.teamintraining.org.

In Loving Memory of a Cancer-Fighting Legacy: UFCW Fights Cancer in Honor of Late Staff Member

The United Food and Commercial Workers (UFCW) is one of North America’s largest labor organizations with more than 1.3 million members. UFCW has been a powerful voice for The Leukemia & Lymphoma (LLS) for 33 years, raising more than $80 million to support LLS's goal of creating a world without blood cancer since the partnership began.

In 2016 alone, UFCW generated more than $4.3 million in the United States and Canada through a variety of fundraising efforts ranging from golf outings to dinners.

Thousands of UFCW staff members participated in this year’s Light The Night Walk and raised nearly $300,000 and counting for LLS. UFCW continues to be a strong supporter of LLS’s fight against blood cancers, and their endless generosity continues to be appreciated.

This year, UFCW Local 1500 had a particularly special Light The Night Walk at Eisenhower Park in Long Island, NY. The team of 75 walkers marched in honor of the late Frank Meehan, who many referred to as the “Cancer Kicker." Their Light The Night team booth displayed a huge image of Frank, who lost his battle to acute myeloid leukemia (AML) in 2014. He spent two decades leading the UFCW’s fundraising efforts to raise money for LLS to invest in research to find treatments and cures for blood cancers. As president of the Long Island, NY Local 1500, he was one of the first leaders to act upon the union’s national relationship with LLS. 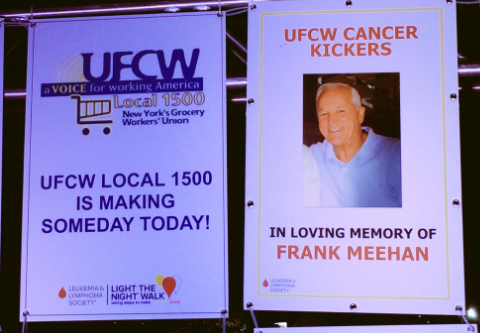 In the spring of 2014, in a twist of fate, he ended up losing his life to one of the most aggressive forms of leukemia he’d been working so hard to see cured. The devoted husband, father, and grandfather was 75 years-old.

Local 1500 President, Tony Speelman, was also the corporate walk chair for Long Island’s Light The Night Walk. He is the first UFCW President to serve in this capacity.

“Frank Meehan did so much for others and he was devoted to finding a cure for blood cancer. We will continue his legacy and fight this horrible disease in his honor,” said Tony Speelman. “Giving back to the community is the fabric of our union, and we are honored to be a part of helping The Leukemia & Lymphoma Society find a cure for blood cancer.” 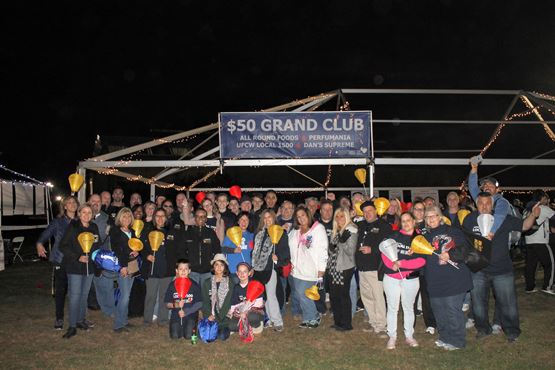 A Cancer Survivor Gives Back

When I meet newly diagnosed cancer patients and their caregivers, a familiar look greets me. I have seen this look countless times. In waiting rooms, during a weekly support lunch for patients and caregivers, and on my own mother’s face.

That look is often replaced almost immediately after I say: “Hi, my name is Ron. I am a leukemia and stem-cell transplant survivor.”

The second look is a look of hope and gratitude. It is a look of anxiety slipping away and making room, for a brief moment, for what may be possible ahead. It is a moment of sunlight in the looming darkness.

When faced with cancer, fear and hope quickly become part of the unpredictable rollercoaster of survival. It is an emotional, physical and psychological turmoil of exhaustion, frustration and exhilaration. 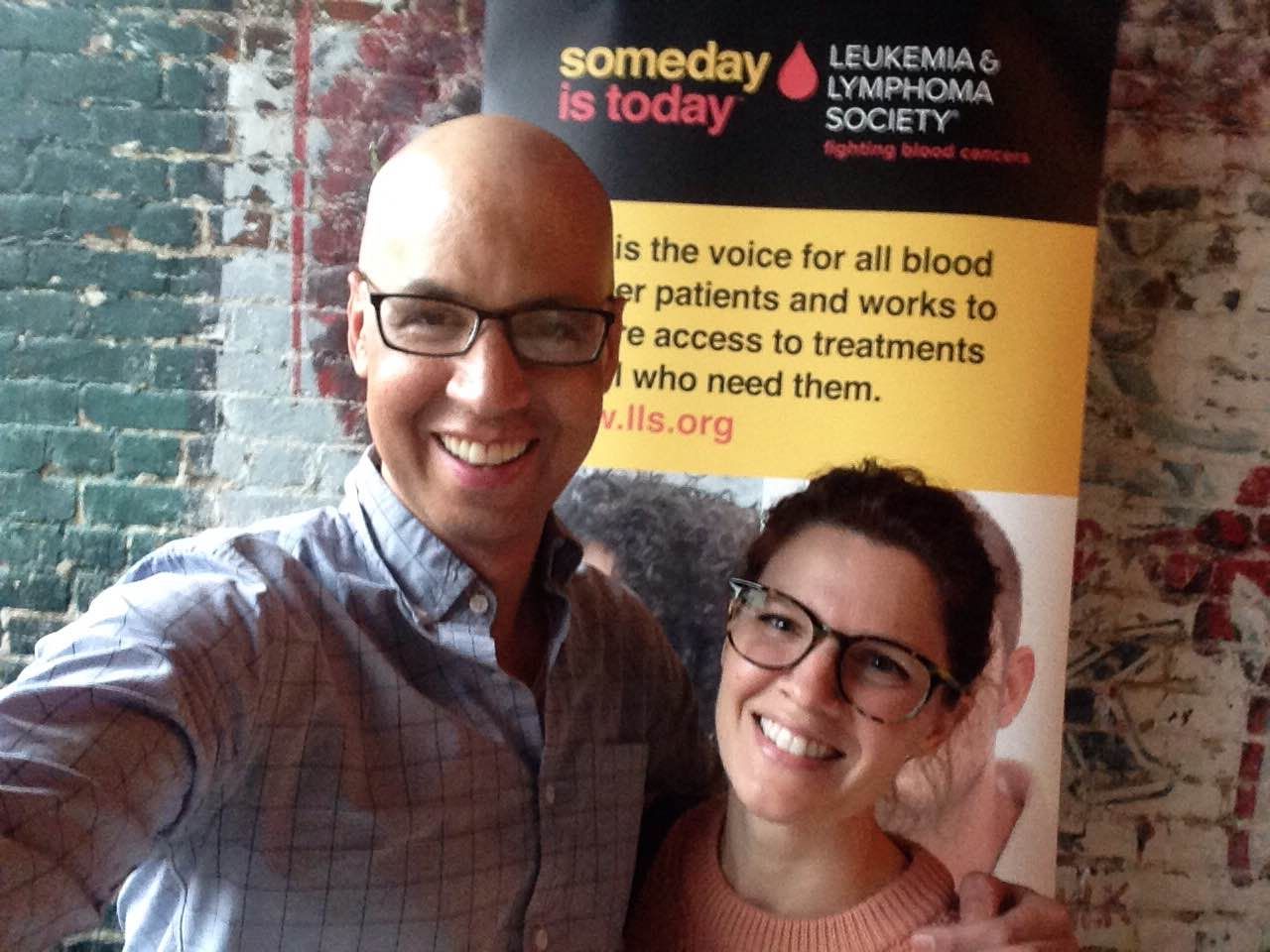 On October 3, 2012, I was diagnosed with acute myeloid leukemia at age 34. After weeks of feeling sick, I walked into the emergency room at Nebraska Medicine. My doctor said I needed to begin treatment immediately. I called my family. Then, I closed my eyes.

My doctor told me that they were going to fight for my life, and that I needed to remain mentally strong throughout the process. I knew then, as I do now, that the future can be extremely unpredictable.

On February 18, 2013, I received a stem cell transplant from my sister, Dorit Azoulay. Today, I am in remission, but not without complications. I still experience fatigue, nerve damage, mood changes and anxiety. I also have chronic and severe graft versus host disease.

Over the past three years, I have had the opportunity to speak with patients, caregivers and the public about my experience with leukemia and my own recovery process.

As a volunteer with The Leukemia & Lymphoma Society, I meet with newly diagnosed patients to provide them support and information. I also write blogs, conduct radio interviews and speak at blood cancer events.

These cathartic conversations and experiences allow me to come to terms with my own experience, while offering insight, hope and support for others facing cancer, as patients or caregivers. It is also an opportunity to educate those who are not aware of the devastating effects of blood cancers.

My role as a patient also forced me to find ways to help my medical team better understand my recovery. I have to pay close attention to my body, medications and their side effects, and to my own emotions in order to report back any changes. That way, my medical team knows how to react or adjust course accordingly.

In January, I was nominated by the LLS Nebraska Chapter to join the AML Community Stakeholder Committee. As part of the committee, I participated in an innovative research study led by LLS with Johns Hopkins School of Public Health. The study aims to capture patient preferences in regards to the development of treatments for AML. 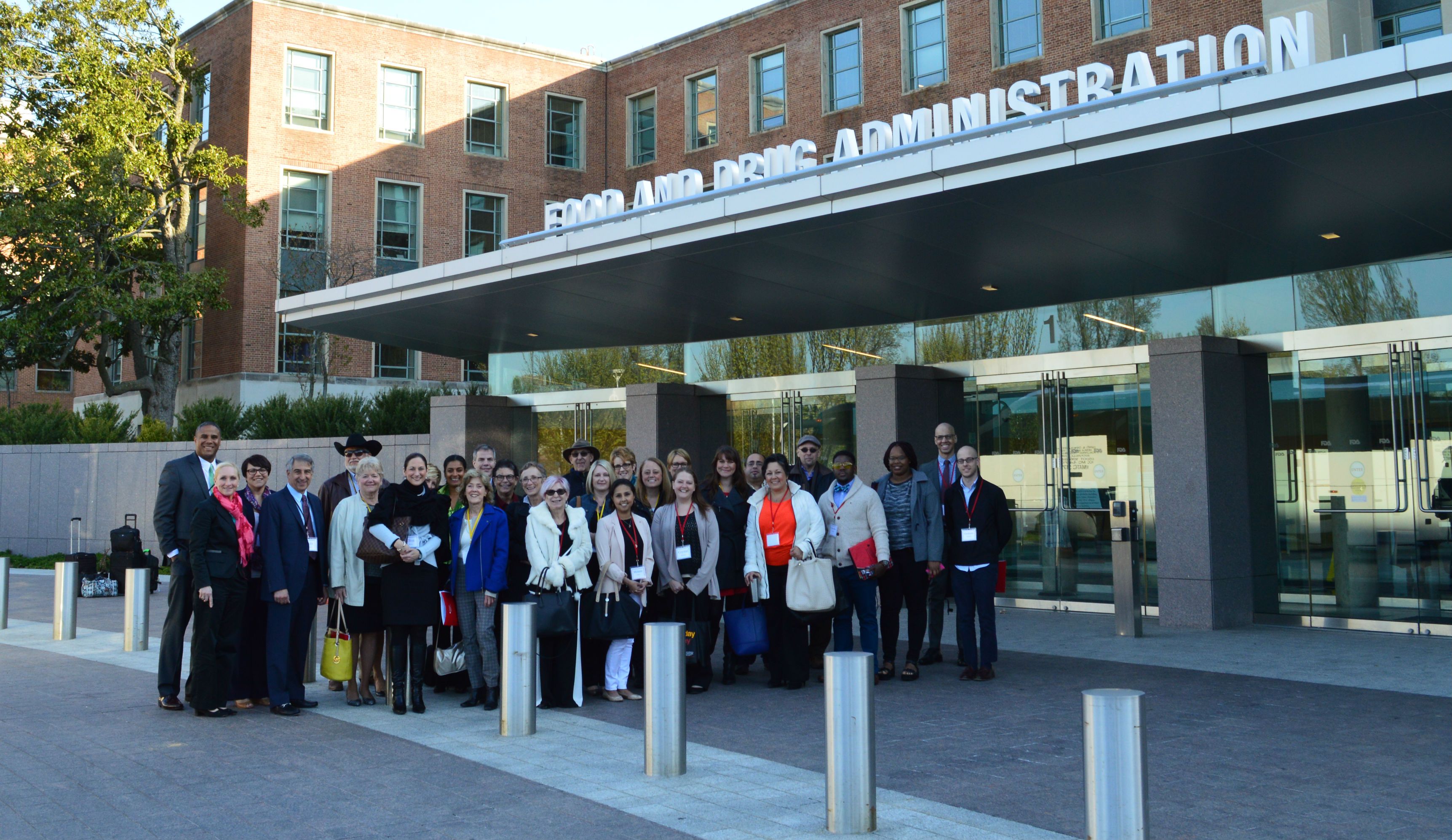 The meeting was a round-table conversation among survivors, caregivers, LLS staff, doctors and the FDA. As survivors, we discussed our experiences with AML and treatment. We listened to each other share the terrifying similarities of our experiences, as well as the delicate differences that distinguish our individual outlooks, hopes and fears.

We spoke about the benefit and risk tradeoffs regarding clinical trials. We realized that we all shared a similar goal: that long-term quality of life must be an important consideration in regards to treatment options for patients. We’re continuing to advance this important issue, and I’m honored to lend my voice on behalf of other survivors.

As a patient, survivor and educator, I know that an important part of my healing and mental strength came from other survivors who, either in person or via social media, shared tips for recovery, offered encouraging words of support, wrote blogs, or came by to spend time with me and cheer me on the path towards recovery.

Early on, it became clear to me that once in recovery, I now had a responsibility to reach back and offer encouragement for others impacted by blood cancer. This responsibility, I found, is like a peak of sunlight on a cloudy day – one that offers hope and a chance for a better outcome ahead.

Ron Azoulay is a 40-year-old volunteer, educator and advocate living in Omaha, NE.