Our father Victor was diagnosed in 1998 at the age of 30 with Burkitt non-Hodgkin lymphoma (BL). He was living in Los Angeles, California, at the time and had just gotten engaged to my mother, Debra. He began not feeling well and was diagnosed with a small mass in his stomach. He was told it was non-Hodgkin lymphoma (NHL). He contacted The Leukemia & Lymphoma Society (LLS), and in coordination with MD Anderson, he went to Texas, and a protocol was set in motion to fight this disease. A year later, he underwent an autologous stem cell transplant at MD Anderson and has been cancer-free for the last 22 years.

We love LLS because it has provided assistance to people with these blood cancers. The research has saved lives, and without the medical breakthroughs and help they have given so many, we may not have had my father alive today! 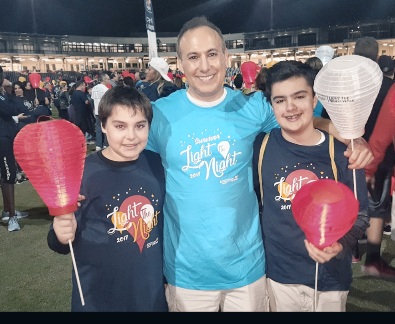