This picture is of my brother and my son. Both fought valiantly from acute lymphoblastic leukemia (ALL) and Hodgkin's lymphoma respectively.

It started in 2009 when my son, Thomas came home from his freshman year in college. He was diagnosed with Hodgkin's lymphoma and was treated right away. He went through the regular protocol which lead to the next level and then trial drugs, radiation, and autonomous stem cell transplant.

In November 2011, my brother, TJ was diagnosed with ALL. He was treated immediately and was in remission by the end of the year however, his best chance for survival was a stem cell transplant. So,I was tested along with my siblings and I was his perfect match of 10 markers.

In April 2012, I became the donor for my brother. Two months later, my son lost his battle. For the next three years my brother had a remarkable recovery struggling only with GVHD in his lungs. Last year, he suffered a relapse. He successfully underwent chemo and was back in remission. He and I signed up to participate in a T-cell modification study in January 2016. He was still having issues with the GVH and that kept pushing the trial study further back.

This past November, five years from the time he was initially diagnosed, he suffered another relapse. This time, recovery was becoming very difficult. Sadly, my brother lost his battle this past Monday, February 20, 2017.

I participated in the LLS's Light the Night walk for a number of years under Team Thomas 5000 and decided to take a break. Now with the loss of my brother, I have two reasons to raise the LLS flag again. I am looking at starting a new team to honor both of them. I hope to walk this Fall 2017 to be the light again. 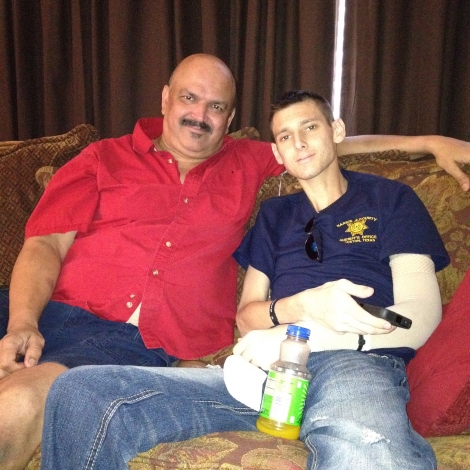