Stanley was only 13 months old when he was diagnosed. He was a happy and healthy baby boy.  Showing no previous symptoms or signs of sickness, Stanley was rushed to the ER one late Wednesday night because his parents, Joe and Krissi, thought he might have swallowed something.  That was December 16, 2015. By 8p.m. on December 17, Stanley was being admitted to the Cleveland Clinic and diagnosed with acute lymphoblastic leukemia (ALL).  They immediately placed his mediport  and began a long (roughly 3 ½ year) 6 phased treatment plan.  Stanley remained in the hospital until they could stabilize him on Christmas.

Stanley has gone through more in his long 3 ½ years of fighting than most will go through in their lives.  He has gone through multiple chemo holds due to low counts and has spent the majority of his young life in isolation.  But Stanley remains a picture of pure joy and radiance.  Stanley has turned a situation that can crush an individual’s spirit into strength, laughter and light.  You cannot be around Stanley for more than 10 seconds without bursting out smiling.  He is pure love and obsesses over making everyone he meets laugh because, according to Stanley, he is the funniest.  Every day he grows in compassion.

Now four year old,  Stanley has had to learn to walk three different times, he has been potty-trained three times, has been poked and prodded his whole life, but as of February 5, he has also put cancer in its place. Stanley rang his last day of chemo bell.  His port has been removed and he took his last oral chemo!

About LLS, Kristina Kuzmickas, Stanley’s Mom said, “Over the past 34 months, my family has been through hell. There has been more pain, fear, anxiety, and sadness than I can truly explain. Up until a year ago, there was also a lot of loneliness. Even with amazing family and friends, there has been so many missed opportunities, isolation, and increased social anxiety. But a year ago, The Leukemia & Lymphoma Society (LLS) came into our lives--bringing joy, understanding, acceptance .....bringing so much LIGHT. Three years ago, I would never have believed so much joy, love, and hope could be part of this cancer journey. It is because of all the hard work and dedication of our LLS family, that people like us get to have beautiful, inspiring moments like we have had. You are our light in the darkness. As long as I live I will never forget the kindness we have been shown by some of the most amazing people we have ever met.” 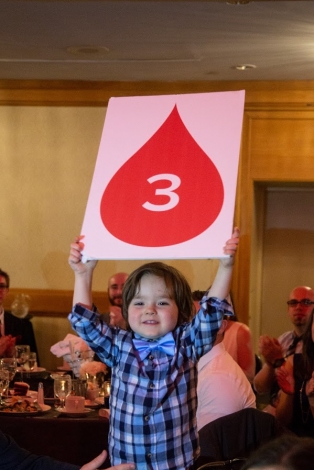