Back in March 2015, my then 26-year-old daughter was not feeling well.  She had severe abdominal pain, overwhelming fatigue, night sweats, a low-grade fever, a headache, and appeared to be losing weight.  At the time, my daughter was working as a speech language pathologist in a hospital in Maryland.  She was misdiagnosed by an ER droctor and two months later, after her primary care doctor ordered an ultrasound, we found that she had innumerable tumors in her lungs and spleen.  We saw an oncologist the next day who ordered more blood work and a PET scan, as well as a bone marrow biopsy and abdominal lymph node biopsy.  She was diagnosed with stage IV Hodgkin's Lymphoma.  For almost all 12 chemotherapy treatments, I watched and cared for my incredibly strong daughter through hair loss, stomach issues, neuropathy, and other physical and emotional side effects of her cancer.  A day that sticks out to me is two weeks after her first treatment, she walked out of the shower with clumps of hair in her hands.  But instead of allowing this moment to derail her, my daughter immediately made an appointment with a local cancer center's hairdresser and off we went.  We grieved the loss of her hair but I saw her strength when she pulled out a small bag with big earrings and put them on with some red lipstick and took a selfie sending it to her close friends.  I believe she also did this to show those closest to her that she was keeping a strong face on, so we could too.

Victoria told me about LLS and how she wanted to do Light The Night in Maryland or DC but it was occurring around the time of one of her last few chemo treatments and she wasn't up to going.  She inspired our family to participate in the event in her honor and we did it in our hometown of Long Island, NY that October 2015.  That October, we celebrated her remission and have done so every year since.  Watching Victoria hold her survivor's lantern the first year she participated in the walk and seeing her stand in the survivor circle was a culmination of so many emotions and a happy moment of validation in how she took a misfortune in stride.  Furthermore, she received a medication as part of her treatment that was being tested in clinical trials and since has been approved by the FDA, helping to potentially  save the lives of other patients to come.  I addition to my involvement with LLS, I now take part in advocacy groups to try to change laws pertaining to pre-existing conditions for health care and to help fund further research to find a cure for all blood cancers, in part as a result of seeing Victoria's determination.

Victoria once explained to me that having cancer felt like she was not driving her own car in life.  That analogy helped me understand just a glimpse of what she was feeling.  I think about the term, "caretaker."  What does that mean?  I feel like I've been a caretaker all my life.  I am a registered nurse and have been taking care of people and family for over 30 years.  Being a parent of a child who is sick and fighting cancer is at another level.  I quickly learned that since my daughter was living on her own and working and in a different state, I had to develop a balance of when to help and when to back off.  I wanted to just protect her and rescue her but the loss of control for me was too much at times,  but I had to be respectful of her as an adult and quietly wait until she wanted help.  Luckily, we've always had an incredible relationship and we communicated about everything, good and bad.  We cried when it was appropriate and laughed even more.  We would have a post-chemo ritual of watching comedy shows and funny vines.

I understand now how impactful being part of the clinical trial was. During my daughter's treatment, my emotions clouded my intellect and I didn't realize how the clinical trial gave my daughter and other patients a chance. I am appreciative for al the patients that walked that path before us to perfect the trial.  In March of 2018, the FDA approved the antibody immunotherapy for use in combination with chemotherapy as a frontline treatment for adult patients with stage 3 or 4 classical Hodgkin Lymphoma.

My advice to any parent or caretaker or even someone fighting cancer is to surround yourself with positive hopeful people.  Learn everything about what you're fighting against.  partner with LLS.  I did early on to make sure I was thinking of everything and they gave me a contact in Maryland in case my daughter needed assistance with paying for medications or anything.  We kept telling ourselves that "it's only temporary."  That mantra helped a lot.  My daughter would ask me every 2 weeks what I was doing for self-care after I would leave Maryland to go back to NY.  I have to admit, I would make stuff up like a manicure, massage, etc. but then she wanted proof!  She was concerned about me.  My daughter is a rock star!  I can't say I now what it's like to be her but if you met her; you would know she doesn't live in the past.  I want to be the person who gives a parent, or any type of caregiver hope.  My daughter has since gotten married to the most wonderful man and followed her dream to pursue her PhD in research  for speech language pathology for aphasia.  She plans for her future and looks ahead.  The hope continues.  I may have been her caretaker, but in turn she was mine too! 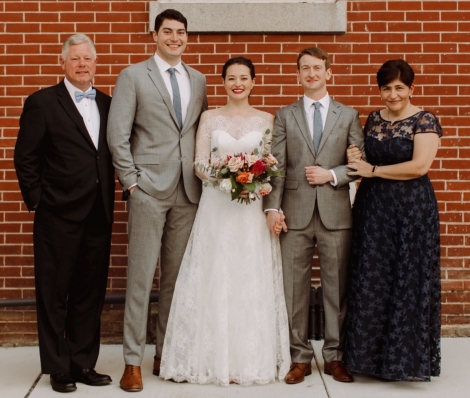