I am 25 years-old, and I am a two-time cancer survivor. I was diagnosed with Hodgkins lymphoma at 16 years-old. It all began with chest pains that increased, later to find a tumor the size of a fist in my chest. After three rounds of intensive chemotherapy and 28 sessions of radiation, I became cancer free in June 2009. I missed the second semester of my junior year of high school, but kept up as much as I could. Since then, I have graduated with a bachelor of arts in clinical/counseling psychology. I worked in the mental health field, working as a behavioral health specialist at a residential treatment center.

In 2015, I noticed my stomach was extending and it was uncomfortable when I would lie down. I decided to see my gynecologist just to make sure everything was okay. After an internal exam, and feeling the hardness of my stomach, she told me I was 5 months pregnant. I was at a loss of words because I was on birth control, I had no pregnancy symptoms, and I was told conceiving a child could be difficult from my previous treatment for the lymphoma. She sent me to get an ultrasound later that day to see my baby. 23 and pregnant, my life felt like it was turned upside down, but I also felt happy and like a miracle happened.

Unfortunately, when we went to the ultrasound, there was no baby. Instead, a large mass was found that I later found out by a gynecological oncologist was attached to my uterus, bowel, and bladder. It expanded my cervix, and that is why it looked like a woman who is that far along pregnant. In order to safely remove the tumor to diagnose it, I had to undergo a total hysterectomy. There was no time to freeze my eggs and the chance of ever having my own child was taken away from me at the young age of 23. Thankfully, we were able to get the tumor out in one piece.

Unfortunately in October 2015, I was diagnosed with Ewing’s Sarcoma in my uterus and pelvis after being cancer free for a little over 6 years. This was not a secondary cancer to the lymphoma, but a primary cancer that happened suddenly and out of nowhere. My doctors could not even find literature on a case like mine going back 50 years. It was so rare that a medical journal was written on my case. Each round of chemotherapy required a hospital admission for constant fluid hydration. After 17 rounds and hospital admissions, some setbacks and extra admissions for fevers, and a sepsis scare, I became cancer free for the second time in October 2016.

Even though I am done with treatment, you do not go back to “normal” the day after. You go into recovery and that takes time, effort, and a lot of strength and energy. Each day I wake up I tell myself it gets better each day. I am on the road to recovery! For anybody newly diagnosed with cancer, let your emotions come out. Be sad, be angry, cry, do what you need to do. Then stand tall and say, “I have cancer, cancer does not have me.” 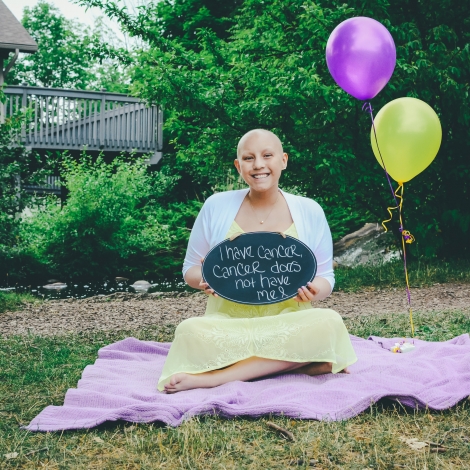