In 2015 at just 15 months old, Nathaniel started to get sick on a regular basis. He started running a fever and his blood count was really low and we pushed for answers when he wasn't getting better until we were told to go to the Children's Hospital. He was extremely pale, wouldn't eat, and lethargic at this point.

They admitted him to a floor for two weeks to continue to run tests, get his fever down, and give him transfusions. They told us they were expecting to diagnose him with leukemia, but after doing a bone marrow biopsy and blood work they ruled it out at that time. They did a CT scan of his head and didn't see anything they were looking for but found a massive infection in his sinuses. He was already on antibiotics that weren't helping so they scheduled him for a procedure to drain his sinuses and get samples to test. He ended having staph in his ears and rhinovirus.

After a few more test results with no answers for the bone marrow issues, they diagnosed him with Idiopathic Severe Aplastic Anemia. We were sent home once his numbers were steady, tests for bone infection came back negative (he was having trouble walking), and fever was gone. They were expecting to have to do immunosuppressive therapy (chemo to "jump start" his bone marrow), but his blood counts began to gradually increase on their own during the weekly checkups.

In May 2015, almost two months after initially being admitted, we went to our last appointment to get a bone marrow biopsy done before they released him from their care. At this time, they found the leukemia blasts. They believe a medication he was given caused the Aplastic Anemia that tanked his counts and masked the leukemia.

While we didn't want to hear "cancer", he is now more than two years into his ALL treatment and doing as well as we could expect. Through the illnesses, needles, pains, etcs., he continues to be a happy kid no matter what is thrown at him. I think he handles it better than the adults around him sometimes! I mean, he ASKS to go see the doctors and nurses! Thank you to those that came before him so he could have a chance to grow up and to those that continue to work towards improving treatment! 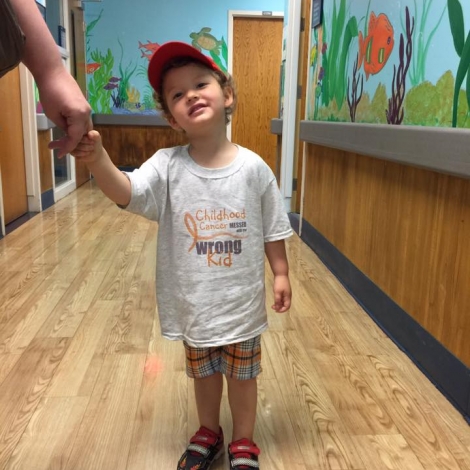