On Monday July 17, 2017 my world got flipped upside down. I got out of work to bring my son, Nate to the ER, he had a bad stomach ache, my thoughts were he might have appendicitis. When I got him to CCMC, he was in extreme pain and they took him in right away. Initially the docs thought the same, they did a bedside ultrasound to find the appendix and it could not be found. A few hours passed and I'm asked to step out the room. At that moment I knew that my life would never be the same... My son, my life, my everything was sick and this time a kiss and band aid wasn't going to fix it.

Everything after that just went by fast without a minute or moment to even process and he was admitted. Nate had surgery the following morning and they confirmed every parent’s nightmare. My baby has cancer. I didn't know what to do with myself, I was responding to messages all day almost robotically. Nate was diagnosed with acute lymphoblastic leukemia (ALL). He spent two long weeks in the hospital where he had multiple procedures and immediately he started the first phase of his three-and-a-half-year treatment plan.

On February 16, 2018, Nate was finishing the ending of his consolidation phase, which is the phase before starting maintenance when he suddenly got a bacterial infection. This is something that we have gotten used to because it happens quite often after receiving chemo. Typically, it’s a minimum of three days in the hospital with antibiotics then he’s able to go home. What was supposed to be a three-day admission turned into a 38-day admission. With 16 of those days being in the Pediatric Intensive Care Unit and seven of those in an induced coma. When Nate was admitted it was supposed to be for a bacterial infection in his blood, what they later found out was that on top of the bacterial infection he had a fungal infection in his lungs. With so many things going on in his body he was in serious distress and developed high blood pressure which caused him to get our worst nightmare, an illness we never knew existed but that would change our life forever called Posterior Reversible Encephalopathy Syndrome, often called “PRES”. It caused swelling of the brain that caused seizures.

On February 26, Nate had more than six seizures which required us to place him into an induced coma. He was in the coma for seven days and it would be a week before he was able to remember who I was and a few weeks before he could remember everything else. Nate had to relearn to do some of the things that we do every day and take for granted like, eating, sitting, and walking. It would be months before we would be able to see our happy Nate again.

Today my son is still not 100% but he’s much better than what I imagined after everything he’s gone through. The doctors are still battling with finding the perfect chemo amount that will keep the cancer away without killing his immune system and now dealing with a chipped femur from the steroids weakening his bones. But he is still standing strong and fighting towards recovering every day. My son is amazing, brave and super strong. Nate is my hero! 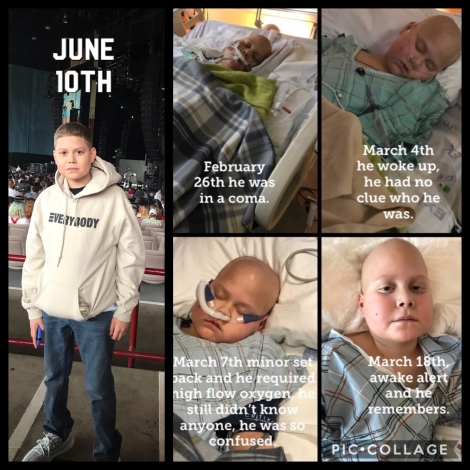