I want to tell you about my hero, my wife, Melissa. She is service-focused from the time she gets out of bed until the time she returns. She's been a part of Team In Training for the past three years and has raised well into five figures to help others. That's what made her Hodgkins lymphoma diagnosis all the more ironic.

Melissa first noticed a lump on Mother's Day. It was completely accidental. We were at brunch with her mom, Melissa enjoying her first bloody mary post baby, when she brushed the right side of her neck with her left hand. Her doctor thought it was postpartum thyroiditis, an inflammation of the thyroid, which sometimes happens after pregnancy. Shortly after we got it checkout by an ENT specialist who thought Melissa should get a CT scan. That's when we learned that Melissa had lymphoma.

Melissa had a biopsy in June to remove the remove initial lump which was the size of a small lime. The pathologist confirmed on the spot that it was cancerous. The surgeon confirmed there were many more cancerous lymph nodes in her neck that he could see. Melissa was a champ and never once complained.

Thanks to her amazing care team, Melissa finished her chemotherapy in November and was able to ring the survivor bell alongside her biggest supporters.  She's had two clear PET scans and is officially in cancer survivorship care!

This picture is from the morning of her biopsy. She met me in the kitchen with a smile wearing her Leukemia & Lymphoma Society jersey that she's worn in races across the country. She saw this as the start of a race. And if you know anything about Melissa and races, she never fails to finish and never lets the smile stray far from her face.

Melissa has started running again and is back to raising money for LLS to help others, starting with the NYC half marathon in March and aiming for the Chicago full marathon in the fall.   All throughout this battle, she's been focused on helping others, which is the true testament to her character." 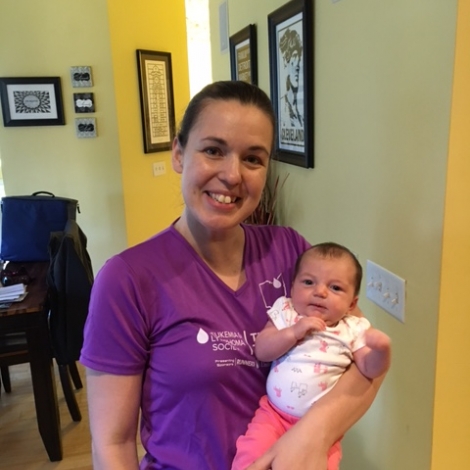