My son Max was diagnosed with B-cell lymphoma in May 2017, just 10 days before his 19th birthday. He discovered a lump under his chin a few months before, and in April he noticed it had grown. After we took him to get it checked out and learned the devastating news, we were in complete shock. He had no other signs of anything else being wrong.

Max underwent three rounds of chemotherapy every three weeks from May to July. He then needed 18 days of radiation, finishing the last one in September 2017. It was a very emotional day as he rang the bell signifying his last treatment. We are elated to say Max is cancer free and has a great prognosis for the future. He is an amazingly strong young man of whom we are very proud!

St. Catherine’s High School in Racine Wisconsin is where Max and his two older brothers graduated from, and where his younger brother, Ben, is now a senior. Ben plays on the Varsity volleyball team, and the team's coach and the players' parents wanted to honor Max and his fight against lymphoma with a fundraiser called "#MaxStrong Lymphoma Night". The game was held in October 2017, and through the purchase of the #Maxstrong t-shirts, a bake sale, and a donation bucket, more than $400 was collected and donated to The Leukemia and Lymphoma Society. We have been blessed with the support of hundreds of friends and family throughout Max's diagnosis, treatments, and triumphant victory against lymphoma. 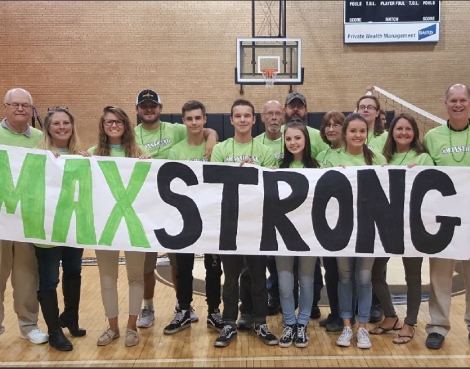