It all started with a race...  I began running back in 2011 with the sole purpose of losing weight.  I joined a running group and became interested in races, specifically the Nike Women's Half Marathon. I entered the lottery and was not selected but then one of my friends recommended running for a charity.  This was the first I had heard about that idea so I looked into it.  I also received communications from The Leukemia & Lymphoma Society (LLS) -- Westchester Hudson Valley inviting me to a meeting talking about the charity and the races.  I learned about LLS and the sometimes devastating effects of cancer on patients and their families, and started to think about those in my life I lost to cancer.

I decided to sign up but was still just thinking about participating in this awesome race with the awesome bling.  It wasn't until I started fundraising and received a call from my Aunt Pat that I began to think differently.  She said "Lovie, you are doing a great thing." Then I remembered I lost my beloved uncle -- her husband -- to cancer. Then our cousin Beverly, then cousin Kwasi to lymphoma, and my dear friend Robin to breast cancer.  The more I asked for financial support, the more I started to hear stories from loved ones, friends and friends of friends who had lost someone that I realized this is a BIG deal and I need to do whatever I can to #BeatCancer!! So, it became my mission to not only train with an awesome Team In Training group for this race but to raise as much money as I could to support this organization. Cancer sucks!!  It really does!!  Participating with Team In Training is the least I could do. I love to run so why not run for a cause?

By October, I surpassed my goal and Nike was more than just a cool race with awesome bling. It became a Race of Hope.  I was proud that day to run in honor of those that I lost to cancer and I wore their pictures on my back.

Since then i have participated in three more Team In Training events raising more than $14,000.  It was my honor and pleasure to run the Nike Women's Half in San Francisco as a part of Katie's Crew. Katie is such an inspiration and her family is awesome.  I am also very proud of LLS and the strides it has made to #BeatCancer. 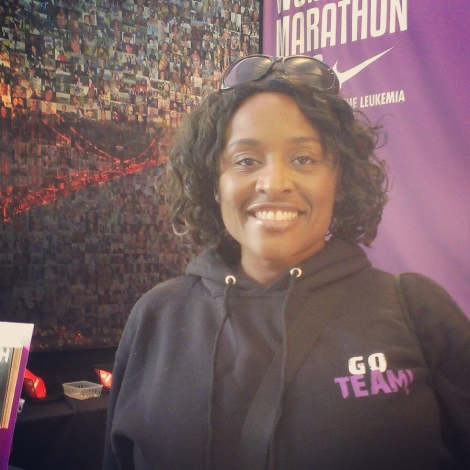