Louis had been on a journey to achieve greater health. For 10 months, he had been on a healthy diet and exercise program and had lost 80 pounds. His doctors were pleased and he was able to stop taking most medications he was on.  However when he went for an annual physical he was diagnosed with chronic myelogenous leukemia (CML) at only the age of 33.

At first, he was frightened but decided that the best way to overcome his fears was to educate himself. Immediately Louis began researching CML and discovered that although the life expectancy for CML patients 15 years ago was three to seven years, some very significant strides have been made to completely change this statistic. In 2000, the development of a targeted therapy called imatinib brought a great victory for CML patients and increased life expectancy substantially.

Discovering that he would simply take one small pill every day and may never have to do chemotherapy, radiation or a bone marrow transplant. Louis began to tell family and friends, "I have bad news, but mostly good news." This therapy has various side effects. Each patient is different, but most patients feel just like Louis: "not even sick".

Louis has experienced few or no side effects and the doctor recently said the treatment was working.

One of the greatest passions Louis has developed since his journey with health and fitness began is running. He was thrilled that running would not be taken from him when he began treatments for CML.

Because of his love of running, Louis decided that The Leukemia & Lymphoma Society's Team In Training is going to bring him to his next goal - to run a half marathon! Currently, he is training for the Rock N Roll San Diego Half Marathon. His coach, Dan Walmer said, "he is a champion and an inspiration." 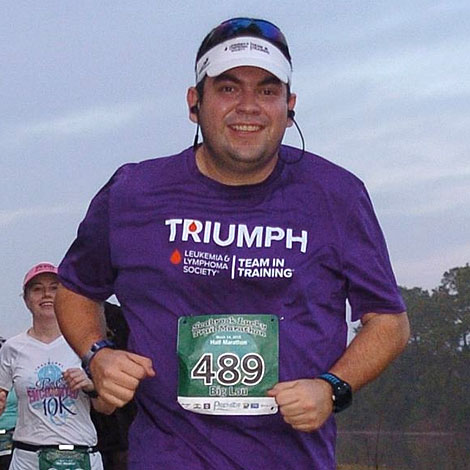