To be healed by the miracles of modern medicine and prayer was the most profound experience of my life. It is difficult to articulate the gratitude my family and I feel in our hearts for the people who made it so. There is no scenario where I would be here today, writing this account, without the research made possible by The Leukemia & Lymphoma Society (LLS).

Against all odds, at 46 years old, I was diagnosed with myelodysplastic syndrome (MDS), a bone marrow cancer that is considered pre-leukemia. Because I was very young for this diagnosis, we had hoped I would live many years with MDS and hopefully never need treatment. I was having monthly bloodwork, and all was going well. Then 10 months later the bottom dropped out of my labs, and it was determined my disease had, practically overnight, transitioned to acute myeloid leukemia (AML).

I had three options for treatment. I chose to start with the middle of the three options in terms of severity and potential efficacy. It was a drug trial that helped, but after seven months, my doctors determined it was not quite getting me to where I needed to be for a bone marrow transplant. So, from February 17-March 17, 2020, in the early days of COVID, I was admitted for a 30-day intense chemo that effectively erased my immune system and rendered me eligible for a transplant.

Regarding the trial, there were many people for whom that treatment was working, and I was thrilled for them as it was less rigorous than the treatment I eventually needed.

On April 30, 2020, I received bone marrow from a 24-year-old, unrelated donor named Michaela from Michigan. More than 21 months later, I don’t think anyone who sees me would believe that I am a transplant recipient and SURVIVOR!

In Kelly McGonigal's book, The Upside of Stress, she recounts this story. “A few years back, while crunching stats for my dissertation, I spent many nights in the student computer lab in the basement of the psychology department at Yale. On one particularly dark night, Bret Logan, head of IT in the psychology department who had come in late to code, saw the light in the student computer lab and popped his head in the door. With analyses to run and an early-morning meeting with my adviser, I was not in the mood for conversation. I shot him a look, whined about my busy schedule, and tried to get back to work. ‘Ah,’ he said, sensing my stress, ‘Just another cold, dark night on the side of Everest.’”

I have thought of that anecdote often over the past few years. “The most meaningful challenges in your life will come with a few dark nights,” says McGonigal. I thought about it in the context, not only in what I was enduring but in terms of all the long days and sleepless nights the researchers, doctors, nurses, and staff spent so that leukemia and lymphoma patients like me would have a chance at survival. It is not hyperbole for me to say I WOULD NOT be here without the research dollars and sacrifices of people who choose to make cancer treatment their life work.

When I reflect on the past few years, I don’t see it as having been horrible. It was an experience that gave me an opportunity to live my faith and practice my humanity with so many others. The bumps in the road were mere occasions for me to gain experience that I will use to empathize with others whom I will walk beside in the future. I even joked with my doctor that she had marketed the treatment all wrong. “It was like an episode of Lifestyles of the Rich and Famous,” I said. “My spa package included a full body wax, a full-body chemical peel, the equivalent of a juice cleanse, the mock mimosas (OJ on ice) were spectacular, and the housekeeping and room service at the touch of a button were spectacular.”

The support of friends, family, and my husband, who ran three marathons to raise funds for LLS, #inVINCIble t-shirt sales, and Team In Training (TNT) support to run the Chicago Marathon was second to none.

25 months post-transplant and I am still 100% Donor DNA in my bone marrow and peripheral blood. The miracle continues!

I have been thinking and praying a lot about which ways I might be able to give back and support others who will someday walk the same road as me. In fact, that was always my mindset. "I'll beat this and walk with someone else someday."

So many strides are being made in the understanding and development of effective leukemia and lymphoma treatments. 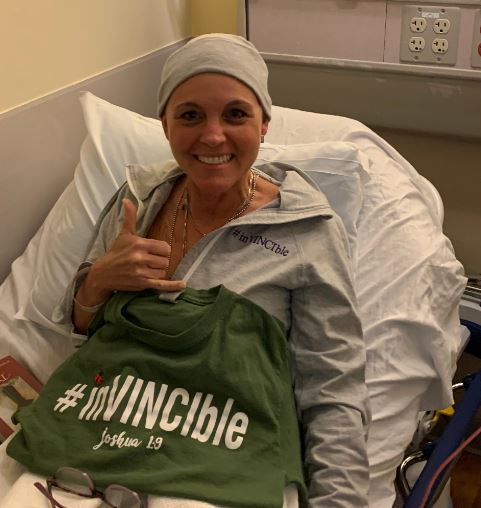