When Noah was born in 2005, we were surprised when the doctor told us he had Down syndrome.  Soon after, we were informed about all of the things that Noah wouldn’t or couldn’t do in his lifetime.

We were also given a laundry list of medical problems that he could potentially have.

Two months after he was born, Noah went into heart failure and had open heart surgery to correct four holes in his heart.  This was a tough time but boy did we have more to come and didn’t know it.  He has since had multiple surgeries, tests, studies, etc.

We were told that Noah carries a mutated gene that causes leukemia so he was at a high risk.  We assumed that since he had already gone through so much in the first four years of his life, there was no way he would get the “L” word.  That’s what we called it.  We figured if we didn’t say the word, he wouldn’t get it.

Then on July 9, 2009…just one month after his 4th birthday… the “L” word became leukemia. ALL ---  acute lymphoblastic leukemia.  He was admitted to the hospital that night.

The very next day he had surgery to implant a port a catheter.  Later that day, he received multiple transfusions and started the first round of chemotherapy. He was hospitalized for three weeks.  We then learned of the 3 ½-year treatment plan for his diagnosis.  We had to find a new “normal” in our life. His siblings could no longer have friends over because of Noah’s compromised immune system. Going to restaurants as a family was a thing of the past. His treatment plan was specific to him having Down syndrome and specific to him responding slower to treatment in the beginning.

It has been two years since his last chemo treatment and we still worry about the leukemia returning.  When you hear that your son’s condition is treatable but not curable…it really hurts.  Quite honestly, it sucks. That’s why we raise money for The Leukemia & Lymphoma Society through the Light The Night campaign.  In fact, Team Noah has raised more than $115,000 since 2009 and we know the money continues to provide funding for clinical trials that have allowed the medical field to make such huge strides towards finding a cure for blood cancer.  Noah is living proof that it is working. 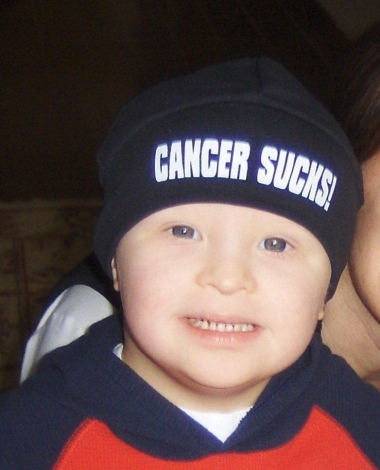