Kennedy was diagnosed with mono at age 12. Within a week she developed swelling and had a hard time breathing when laying down. Our pediatrician advised us to go to the children’s hospital where they did CT scans, MRIs and discovered a soft-sized mass pressing against her airway. There we got the news you never want to hear, our girl had lymphoma. Before that day, she was a normal child, playing volleyball, singing in the choir, being a kid.

Today (September 2021), Kennedy is in remission but is still on chemo and spinal infusions. Kennedy’s energy levels are low, even in remission. After five minutes of activity, she is too tired and has to rest. Her volleyball team has asked her to come back, but she doesn’t have the stamina. She is able to sing in our church choir, but she can’t stand with the rest of the choir – she sits beside them because she doesn’t have the wind capacity to stand while she’s singing.

This journey has been a whirlwind for our family. You never know what the next day is going to bring; we could be headed to the hospital with an uncontrolled fever. It’s an ongoing roller coaster. Our family has PTSD, especially our eight-year-old son who is constantly scared of losing his sister.

When Kennedy was in the PICU, we facetimed her brother, and he saw her with all the IVs and lines. It destroyed him to see his sister that way.

Even in remission, Kennedy’s life is riddled with long-lasting side effects. No child should ever have to give up their childhood for cancer treatment. 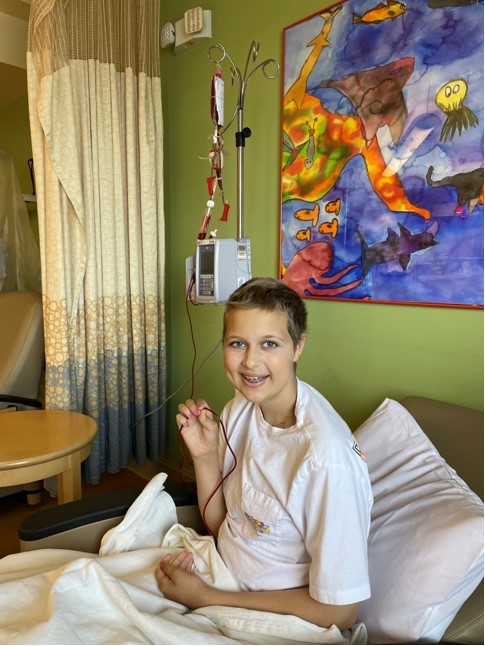