March 22, 2020- 7 years since acute myeloid leukemia (AML) diagnosis, CURED!!! I am so blessed to be alive to celebrate my 7th year since diagnosis of AML! Who celebrates being diagnosed with AML or any cancer for that matter? But let’s be honest, in the cancer lottery, AML, is not one of the preferred. At least if you cling to cancer stats which is something I highly discourage. The first problem with AML stats specifically-the mean DX age of 68ish. I have spent substantial time around several AML support groups and I routinely meet people in their 50s, 40, 30 and 20s stricken with this demon.

Seven years ago today, I was an otherwise healthy 48-year-old mother of three amazing daughters, 8, 10 and 12 and married to the love of my life. I worked full-time for the US Air Force as a civilian manager and taught master’s level graduate courses part-time. I had absolutely no symptoms at diagnosis other than a few bruises (very typical for me) and a very wonky CBC that was done as part of routine blood work. At diagnosis, my platelets were 98, WBC was 1ish and my ANC was .02 and had been there for months. Like most of you, I was referred to a hematologist who, based on the CBC and the fact that I had not had any illness to include a cold for years, did not think “I had anything to worry about”. But just to be safe, I had a BMB to rule anything out and twelve hours later, I was admitted to the hospital with confirmed AML with the dreaded 7+3 chemo dripping into my Hickman six hours later. I was blessed with an amazing medical team at LDS Hospital in SLC, UT led by the amazing Finn Peterson from Denmark who has been specializing in acute leukemia for 30 years. He immediately saw the shock an awe in my eyes and graciously prescribed anti-depressant and anti-anxiety meds that helped me so much during my year of chemo. Dr. Peterson did an amazing job literally drawing on the board in my room the cytogenetic components of AML because my very first question was, is AML hereditary (with thoughts of my precious daughters)? He confirmed it was not hereditary but certainly genetic-wait what? He asked about exposure to benzene and explained that people around military installations (yep 32 years of that) and those exposed to secondary smoke (yep both parents chain smokers) had higher chances of blood cancers. BTW, my brother was diagnosed with mantle cell lymphoma about a year after me and is currently scheduled for a SCT on 9 April. I believe there is an environmental causation and possibly hereditary for some types but I do think most cancers are random.

Whenever I would start down a pity party about “why me” relative to cancer, my mind would always go to children stricken with this disease. As adults we can be reasoned with, made to understand why this procedure (BMB) is necessary. Dr. Peterson further explained the three categories of AML-favorable, intermediate and unfavorable. If I was in the favorable category, I may be able to be treated with chemo only. Otherwise, stem cell transplant was the treatment path. He promised I would know my sub-type and any mutations within two weeks. But job one was to get me into remission. Fortunately, I tolerated the Induction chemo well with only slight mucositis and no other complications, not even a fever. I managed to walk 3 to 4 miles everyday whether I wanted to or not. As promised, 2 weeks in I was overjoyed to learn I had Inversion 16 with no mutations so chemo only for me. I spent 28 days in the hospital and sent home to return in four weeks to begin consolidation. Now, this is where my smooth cancer journey goes somewhat off the tracks but I share it in case others have or will experience this anomaly. The consolidation process for AML has been the same for decades. Thirty days between doses, six days getting chemo HiAriC, nadir with transfusions for a month and back for another round. Not this girl, although I continued to feel fabulous and telework full time for the Air Force, my bone marrow took a huge hit. I gave myself Neupogen shots every day from day 10 to day 40 because my white cells would not come up and my dang platelets were the scourge. The required platelet number to begin another cycle of consolidation was 100, mine never got there. In fact, my consolidation sessions were twice as long as advertised with a reduced dose from 3.0 to finally 1.5. The great news is, I am in remission and living a very abundant life. My med team followed me with quarterly CBC and PCRs for four years and due to over 40 red blood transfusions, I require phlebotomies to decrease the iron stores on my liver. In Dec 2018, I was deemed cured by my team. I am forever grateful.

I work full-time, take a month long European or Australian vacation with my girls and hubby every year and feel amazing.  Not all who are diagnosed with AML have a difficult path. We all hear about the hard paths, I want people to know some have a rather uneventful journey and most important, can be cured. I pray someone reading this is helped and encouraged. 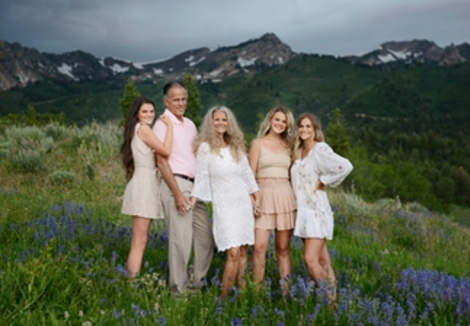