Life is such a blessing. Sometimes we think that there’s no way out, we limit ourselves, or we simply think to give up. Truth is, like we say in my family, “Solo hay que estar vivo para ver cosa,” or “You only have to be alive to witness things.”

My parents are first-generation immigrants from the Dominican Republic. I am a cancer survivor.

About seven years ago, I thought I was on top of the world: 23 years old, handsome, drove a nice car, beautiful girlfriend, traveled often, and had strong family/friend bonds. I had just graduated from Suffolk Community College as a Fitness Specialist and was pursuing a degree in Nursing when my faith was put to a test. After weeks of not feeling well, my girlfriend at the time took me to the Emergency Department at Mathers Hospital in Port Jefferson, NY. Many tests were run but no results, only suspicions of possible complications. At that moment, with more questions than answers, my parents made a decision that saved my life. They removed me from that original hospital and took me to New York Presbyterian in Manhattan, which was the best hospital they knew.

In the following days, I underwent various procedures, from blood tests, CAT scans, and spinal taps to biopsies. These procedures seemed foreign to me, and they all happened in a blur that did not seem real at the time. The final report came in. My parents were hit with the news that no one could ever prepare to hear in their life. “Your son has cancer.” My cancer journey began that day.

I was diagnosed with diffused large B-cell lymphoma (DLBCL) with concentrations in the brain and lungs. Lymphoma itself is a cancer that starts in the cells that are part of your body’s immune system, with DLBCL being the most common type of non-Hodgkin lymphoma (NHL). While it is so common, it is also extremely aggressive as it attacks your white blood cells which are responsible for fighting infections. The silver lining in the middle of all of this was that my doctors felt that I had a high chance of survival because of my age.

Every two weeks for six months, my parents took me to the hospital to receive chemotherapy. Although I felt weaker and weaker with each round, I kept my chin up and continued fighting. In addition to chemo, I also needed to receive a stem cell transplant. This was the most nerve-wracking part because of the fatal possibility of my body attacking the cells administered to me. How was I, at 23, supposed to accept that the thing that was supposed to help me the most could also quite literally have more dire consequences for me?

A friend I met at the hospital lost his battle as I was going through mine. At that time, all I had was prayer, family, friends, and groups of people I didn’t even know who were praying for my health. Despite these moments being very stressful, there was always an internal peace I felt throughout the process. It was like I knew nothing was going to happen to me. I used to joke around and laugh in conversations with doctors/surgeons right before major surgeries. I particularly remember speaking to them about how I missed eating rice, beans, and chicken.

I am a firm believer that the attitude you assume when facing any difficulty will dictate your outcome. In the upcoming weeks, my oncologist spoke to my family and me to state that I was cancer-free.

It was a miracle.

I began rehab shortly after. I remember getting up after my last brain surgery. For three days I wasn’t able to lift my head off the pillow. The big day came, the day I would get on my feet again. I got up and took my first steps. I felt a bit frustrated because in my head I knew how to do this, I’d done this before. But I couldn’t walk without assistance. You could see the joy and tears of happiness on every person’s face in that room. From that day on, I worked day by day to restore my health.

In 2017, I was cleared to resume my studies, and I chose St. John’s University. The SJU community has welcomed me with open arms during these two years. I’ve been blessed to join organizations that promote the common good such as the Catholic Community for Animals (CCA), the Latin American Student Organization (LASO), and the Caribbean Student Association (CSA).

St. John’s University prepared me mentally and spiritually to become the best professional/citizen possible. I interned at New York Presbyterian (Queens) and met healthcare professionals who I admire just as much as those patients who remain strong throughout their hospital stay. At the lowest point in my life, I was not able to speak, eat, or walk. I was like a newborn who had to learn everything. All I had was hope, prayer, and the support of my family and friends.

I want to say to you all today, do not give up no matter what struggles you may have. God’s time is perfect. My goal in life is to serve as a beacon of hope for all those who are fighting, admiring the survivors, and honoring the taken. Faith kept me alive, and today I am thankful for opening my eyes, hearing, and being able to stand on my feet because many people are not able to.

In closing, I would like to thank the amazing medical staff who treated me, from the housekeepers to the surgeons, my mother who never left my side, my father who always advocated for me when I was unable to, my family and friends who until this day have been supporting me, and finally, my partner in life at the time because she never gave up on me. I love all of you.

I want to share a quote that inspires me every day: “Courage is not having the strength to go on; it is going on when you don’t have the strength.” Theodore Roosevelt

Love yourself, love each other, love the planet. 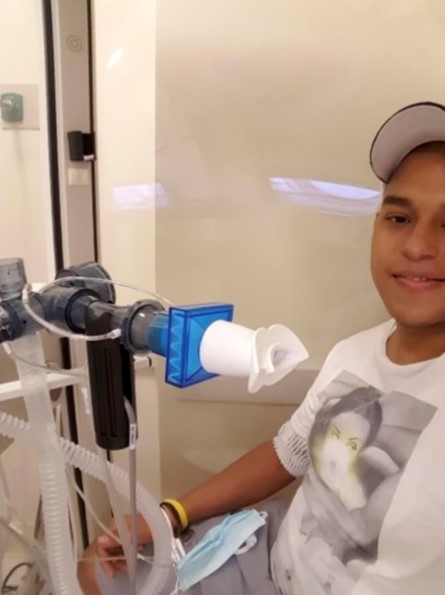