I am a 36-year-old cancer survivor. In February 2014, I found a suspect lump and had become unusually tired. I was a career-driven single mother of a very active 10-year-old boy, so when I say unusually tired it was time to call the doctor. Within days I was thrown into the crazy and often times confusing world of hospital appointments and insurance company battles for various procedures and surgical biopsies. We became pros at the waiting game.

On April 2, I had my results. I sat on a cold medical bed, with my black Converses swaying nervously. My fiancée carefully placed his sweatshirt over my shoulders like a cape and lightly kissed my forehead whispering ‘I love you’. The door opened……my surgeon walked in…..my feet stopped swaying…… he sat in front of me and I heard only bits and pieces of the words he spoke……….. CANCER….BLOOD….STAGING…CHEMO…NON-HODGKIN LYMPHOMA. I had stage 4 follicular non-Hodgkin lymphoma. Later I would find out I had the big ‘C’ everywhere – my collarbone, my abdomen, my groin, underneath both of my arms, and just a bit in my bone marrow - it had been growing very slowly for a number of years.

WHAT?!! Are you serious?!! No way. I’m a single mother with a full-time job. I don’t have that kind of PTO; I have a mortgage to pay. I just found the love of my life. We’re all so happy together – this cannot be happening…but it did. Cancer doesn’t check your Outlook calendar.

There was good news and bad news. The good news was even though technically it was stage 4 cancer, none had traveled to any organs and a new chemotherapy regime was highly effective for my scenario. I began the bendamustine with rituxin chemo cocktail in May for six months. By October, I reached full remission and walked out with a full head of hair. I was able to stay home and remain relatively active for the majority of my treatment.

The bad news is that my type of blood cancer is not curable. This will not be my only treatment. When I see my oncologist every three months, we talk about ‘when’ not ‘if’. The relapse rates are high and my chances are great that I will see treatment again within the next few years.

Thinking about my future is tricky. I want to dream about seeing my son become a man and growing old with my family. Instead I try to focus on dreaming of the now to help my future be possible.

This is why I became so dedicated to The Leukemia & Lymphoma Society (LLS). Everyone has a different reason they become involved with LLS. I actually became involved thanks to my son on a very bad day during my chemo treatment. At about the halfway mark there was a scary day when I woke up violently ill from treatment and was rushed to the infusion center at the hospital. Since kids aren’t permitted in the center my boyfriend sat patiently with my son in the waiting room. Both were nervous and scared, waiting to hear from doctors of my progress. They happened to see a campaign brochure for the LLS Light The Night event and decided then and there they wanted to do something to put an end to blood cancer for good. Obviously when my boyfriend came back to see me, as I lay there with my port hooked up sipping on ginger ale, I was fully on board to destroy blood cancer forever and said SIGN ME UP NOW.

I had so many friends and family that wanted to help and now I had a path on which to send them. We partied and held various fundraising events through the summer into early fall. Team Unicorn ended up placing in the top three Individual teams for the Richmond area LLS Light The Night event, raising more than $8,000. Since the Walk, I have also become a member of the LLS Man/Woman of Year and Light The Night Campaign Board. I fully expect Team Unicorn to be a top contender again in this year’s Walk.

With six months of remission behind me, I will be joining my sister and longtime friend in my very first 10K in NYC with the Moms In Training LLS team this summer! Becoming involved with LLS has challenged me to merge my career life with my personal life. My work colleagues have become involved in my mission by donating money, fundraising ideas or their time. Everyone can give in some way.

I don’t like to use the term battle or fight when I talk about my experience, because it feels like those who we’ve lost from this disease are gone because they weren’t strong enough. I was merely lucky this go-round with the right puzzle pieces fitting together at just the right times. LLS supplies a great many puzzle pieces to cancer patients of all ages. They are an unmatched in the way of blood cancer research, patient support, public policy work and the end goal of ultimately finding a cure for all blood cancers. LLS is making our distant futures a possibility. 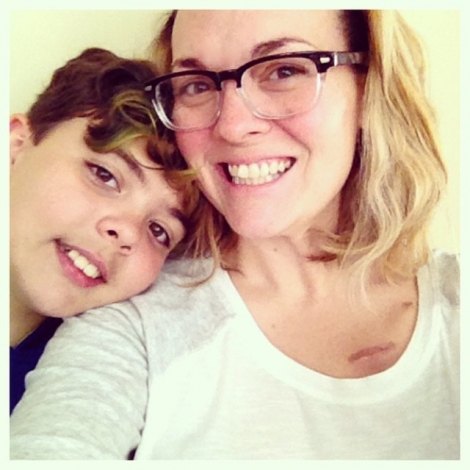