Cynthia was on a family vacation in 2015 when she began experiencing back pain so severe that she had to be in a wheelchair for the rest of the trip. When she returned home, Cynthia went to see her doctor who referred her to an oncologist. After several tests, Cynthia was diagnosed with multiple myeloma. She was devastated. Chemotherapy and radiation soon followed, along with horrible side effects, sleepless nights and countless blood transfusions. But Cynthia was not going to let cancer defeat her. She recalled a quote, “cancer is a word, not a sentence,” and thought “OK, I got this.”  I felt spiritually strong.

In August 2016, Cynthia underwent an autologous bone marrow transplant that used her own stem cells. The next day, she participated in an immunotherapy clinical trial. It was an extremely difficult time for Cynthia and she says the experience gave a new meaning to the word sick.

Since her transplant and the trial, Cynthia is doing much better and helping others in similar situations. In September 2019, she received the exciting news that she was in complete remission.

Cynthia’s faith has been vital part of her physical and mental healing and is so grateful to her family, friends and the doctors she credits for saving her life.  She is also thankful to The Leukemia & Lymphoma Society (LLS) for funding one of the treatments that helped save her life and for providing a valuable support system. LLS gave her the information, support and encouragement she needed. Inspired by her experience, Cynthia became an LLS volunteer and helps others the way LLS helped her: by giving hope.

Cynthia volunteers from LLS through support groups and Myeloma Link, a program that aims to improve access to education and treatment for myeloma in the African American community. She also fundraises and participated in her local Light The Night walk, which gave Cynthia an overwhelming feeling of accomplishment.

Despite some complications from the disease and treatment, Cynthia says, “Every day that I survive is a blessing and a victory. If you ever feel that you’ve come to the end of your rope, remember to tie a knot and hang on!” 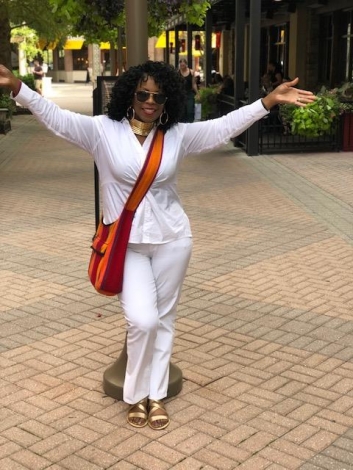