I was first diagnosed with Hodgkin's lymphoma in June 1991, about a month shy of my 21st birthday. I was in school for cosmetology, had just signed divorce papers from my first husband and was dating the man who would become my second husband. Life was great for me.

My fiancé stood by my side from the first diagnosis to the last radiation treatment. In July 1992, we discovered that we were going to have a baby. It was a baby that I had yearned for all of my life, and a baby that I was fearful I could never have. It was also a baby that I was advised by doctors not to have. We were told that he would be very sickly, and very tiny and have numerous developmental issues. This, however, was not their choice. It wasn't mine.

Our very healthy 9lb son was born in March 1993. In October of 1998, we added our second son. Life couldn't have been more perfect. But in March 2000 I learned my cancer came back. Radiation was not an option. We had the daunting task of telling our young boys that Mommy was sick. Our six-year-old summed it up best when he asked questions like, "Are you going to be okay? Are you still going to be our mom?"

Chemo robbed me of everything but my spirit. My amazing family made that horrible experience a bit more tolerable. My final treatment was just before Thanksgiving. I had so much to be thankful for. 2004 started out okay, until I was diagnosed for a third time, again with Hodgkin's lymphoma.

I felt as though there was no option left, but my brilliant doctor still had a trick up his sleeve. I endured an Autologus Stem Cell Transplant. The first step is six rounds of chemo to put the body in remission. The second step is to stimulate and harvest your own stem cells. After they are harvested, they are frozen to kill any "bad" cells. The third is high dose chemo that kills every cell in your body until your stem cells are re-introduced. I've never been to hell, but I don't think there is much of a difference. I received my stem cells back on my 34th birthday, July 19, 2004. Up to that point, I wasn't sure I was going to make it.

Again, my family and my faith were my strength. Now, since 2004, I have not been diagnosed again with Hodgkin's lymphoma, but, in 2009, I was diagnosed with a Synovial Cell Sarcoma. I had radiation on my right leg, and the main muscle in my calf removed. My scars make me look like an Indianapolis road map, but I have earned all of them. I still fight, I still walk every year. I will walk until I no longer can, or I no longer have to. Personally, I am hoping for the latter. 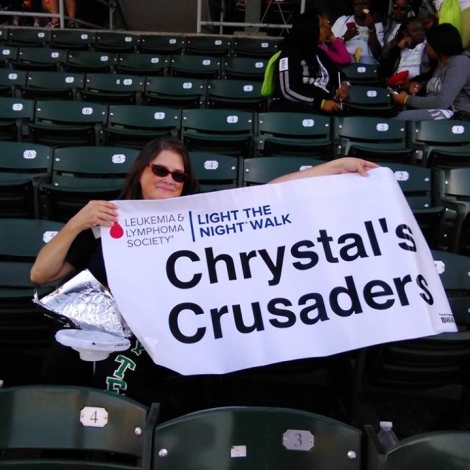