In April 2020, three-year-old Cayden Addison began experiencing leg pain and developed an unusual limp that alarmed his mother, Courtney. Soon, the pain progressed to a stiff neck and loss of appetite. Just two weeks later, after multiple tests and doctor appointments, Courtney and her husband would hear the words that every parent fears, "your child has cancer". Cayden was diagnosed with a high-risk form of blood cancer, Philadelphia chromosome-positive acute lymphoblastic leukemia.

"I didn't hear anything else after that," said Courtney. "It felt like my heart literally imploded and I sobbed like never before. My entire body shook, my hands and feet went numb.I had to excuse myself from the room so Cayden wouldn't see me so upset."

From that moment forward, Courtney has been on a mission to get Cayden through the surgeries, chemotherapy and countless overnight hospital stays that he had to endure. Determined to learn everything she could about blood cancer, Courtney credits Cayden himself for teaching her the most valuable lessons.

"I have learned so much by watching Cayden," said Courtney. "At his young age, he has taught me about being brave, strong, resilient and grateful. Even when he's dealing with the harsh side effects of his treatment, he continues to smile and remains his playful loving self."

In those moments when Cayden is laughing and playing, Courtney can escape momentarily, forgetting about the difficult mountain her family is currently climbing. While Cayden's uphill battle with cancer is not over, the Addison family found a strong support system at The Leukemia & Lymphoma Society (LLS), after a friend encouraged them to sign up for its flagship fundraising campaign, Light The Night.

"Through LLS, I've learned there is a whole community of people out there who were just as passionate and dedicated to fighting this diseases as I am," said Courtney. "I became most passionate about The LLS Children's Initiative, a $100 million multi-year effort that looks to revolutionize the standard of care so that children not only survive, but thrive after cancer." She emphasizes, "Rest assured, I know LLS's great work is helping bring us closer to a world where no parent has to hear, ‘your child has cancer.'"

Cayden is currently in the interim maintenance phase of his treatment and was named LLS's National Honored Hero of the 2021 Light The Night campaign. 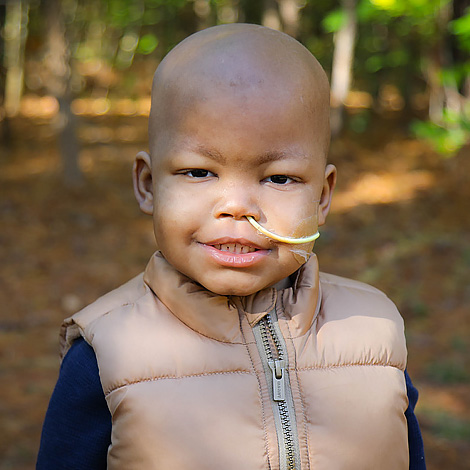