It was July 2014, I got up and went for a quick morning jog before work. It’s Iowa, it was hot and humid, but I was unusually winded after that jog. I figured it was due to being humid outside and finished getting ready to go to work (I was a registered nurse at a physician’s clinic doing triage). During the day, I continued to feel a little winded and noticed I had a cramp in my calf. The nurse in me said to ignore it, that I was overreacting, but I decided to call my physician. She directed me to my local ER for fear of a blood clot. I did as I was told, and luckily a CT scan revealed no clot, but it showed numerous enlarged lymph nodes in my chest. I was referred to the University of Iowa where I first underwent a fine needle aspiration (FNA) via a bronchoscopy as my lymph nodes were attached to my major blood vessels. The FNA came back as “highly suspicious for lymphoma,” but a tissue biopsy was needed to confirm the diagnosis. A cervical mediastinoscopy was done on one of the lymph nodes, and it came back benign. However, a large cyst was found on my thymus, and the surgeon told me to get an MRI in a year to monitor it.

Fast forward a year to September 2015, and like a good patient, I did my MRI on a Tuesday, my day off. I was keeping score at my daughter’s volleyball game when my phone rang. It was my physician. My MRI was back already, and it showed multiple enlarged lymph nodes scattered throughout my chest. I was referred back to my surgeon in Iowa City, and we started over. This time a thoracic biopsy was done with an overnight stay in the hospital. Five days later, I had a diagnosis, classic non-sclerotic Hodgkin lymphoma (NSHL). I was referred to an oncologist locally and underwent a bone marrow biopsy, lots of labs, more scans, and tests. Other than the cancer, everything was pristine. You would have never known I was sick. Little did I know, I had been experiencing itching all over my body, I thought it was due to mowing the lawn and gardening and being in the weeds. Apparently, this is a symptom of lymphoma. Chemo was prescribed, and I started ABVD chemo every other week for 12 treatments in October 2015. It was rough at first, a horrible burning sensation in my mouth, fatigue, lack of appetite, and the quick thinning of my hair. I became neutropenic, so I took neurogenic shots to boost my white count. Eventually, I got used to the new routine. I was pursuing my BSN at the time, and I wanted to keep working. After 90 days, I was able to return to work part-time. I kept pushing my schoolwork, and the holidays came and went. I had a PET scan in February 2016, and it came back clear. After just eight treatments, my cancer was gone! A miracle! My life was going back to normal but only for a short time.

In late May/early June, I started having all-over body itching again, but I kept telling myself my mind was playing tricks on me. I finally called my oncologist in late June. She ordered scans, and unfortunately, my scans showed enlarged lymph nodes in my chest again, bigger than the first time. I was referred to a lymphoma specialist in Iowa City due to the fast reoccurrence. He prescribed ICE chemotherapy for me after a barrage of tests and labs and recommended a stem cell transplant as well. The ICE chemo had to be done inpatient and gave my kidneys a little hit, so I had to stay a little longer every time. After three ICE treatments, my cancer had shrunk, but it wasn’t gone. But my oncologist felt it was time to do the stem cell transplant. I was doing an autologous transplant and donating to myself. The process was started. I donated my cells over two days after taking shots to produce cell production, and in late October 2016, I checked in to the University of Iowa hospital to get my transplant. The pre-transplant chemo was rough, lots of different and new chemo drugs to drop my counts down low. Then came the transplant. After the transplant, it was managing my blood counts and symptoms to make sure I stayed healthy. I was told at least 30 days in the hospital, but I was discharged after 20! I had tolerated everything well enough to go home to continue my recovery. Lots and lots of restrictions, but I followed them.

Right after Christmas, I had a PET scan to see how the transplant went. On January 3, 2017, I was told the transplant had failed, and my cancer was worse than it had ever been. Devastating news. Not what I wanted to hear. I won’t lie, I wasn’t sure I wanted to do a third round of treatment. I thought for sure that for as good as I felt, I was cured, and hearing I had cancer for the third time was unbelievably hard to take. I didn’t know how much fight I had left in me. But I knew I had to do it for my husband and my kids. My husband and I decided that we wanted to seek another opinion. We flew to MD Anderson in Houston. The oncologist there gave me a very specific course of treatment, contacted my oncologist in Iowa City, and it was go-time. Immunotherapy was the new plan, and another stem cell transplant but an allogeneic one this time. It was February 2016, and I started the Brentuximab every three weeks. After just three treatments, my PET scan showed I was cancer-free! However, this was a Band-Aid solution. We had started the stem cell match process, and out of my four siblings, my eldest brother was my match. However, we had to wait for a bed on the transplant unit. My oncologist in Texas had me do another Brentuximab treatment to keep the cancer gone, and on May 30, I checked in for my transplant. I was warned this would be more intense than the autologous transplant and to expect a long hospital stay. My brother did his donation, with 20 million stem cells waiting for me. I did the same as before, pretransplant chemo and then my transplant. To me, it felt exactly like the autologous transplant, and I sailed through it with little to no side effects. Twenty days in the hospital, and I got to go home with all of my restrictions as before. But this time it was summer, so I had to stay indoors for quite some time and out of the sun and away from my livestock. They were waiting three months this time before doing a scan. There were lots and lots of doctors’ appointments, I was on 24 pills a day and couldn’t even clean my house. This was the hardest part, I felt useless. But I was going to do everything in my power to make sure that I did everything right and followed the doctors’ orders so I would be cured. I had my scan on September 28, 2017, and on October 2, 2017, my oncologist gave me the best news, the treatment had worked, and I was cancer-free!! Remission at last! After two years of battling, I got those magic words.

It wouldn’t be until February 2018 that I was able to go back to work but no patient contact. But I adjusted and found a nursing job that I could do just that. My whole cancer journey was about pivoting. I finished my BSN and walked across the stage of Iowa with my bald head and wearing my mask proudly, I went to all my kids’ school functions wearing my mask since I was neutropenic. I had sick days where I lay in bed, and my family took care of me. My kids slept by my bed because they were scared of losing their mom and of the unknown. My husband held me during my breakdowns and my fears that I didn’t know if I could keep going. My family and friends pitched in and shuffled my young kids to their activities, people brought meals, and so much more. I approached cancer with a positive attitude, and it changed my life for the better. I know that sounds crazy, but it was a blessing in disguise. Cancer taught me to cherish all the small moments and memories. I didn’t take life for granted before, but this journey solidified that.

There’s so much more to my story, but I’m sure you’re tired of reading this. All I can say is that cancer changed me. I learned a lot about myself, my strength, my family, and our love for each other. My children and my husband were amazing and my support system. I’m getting to make memories again, watching my children grow up and graduate. That’s all I need in life ― the memories. 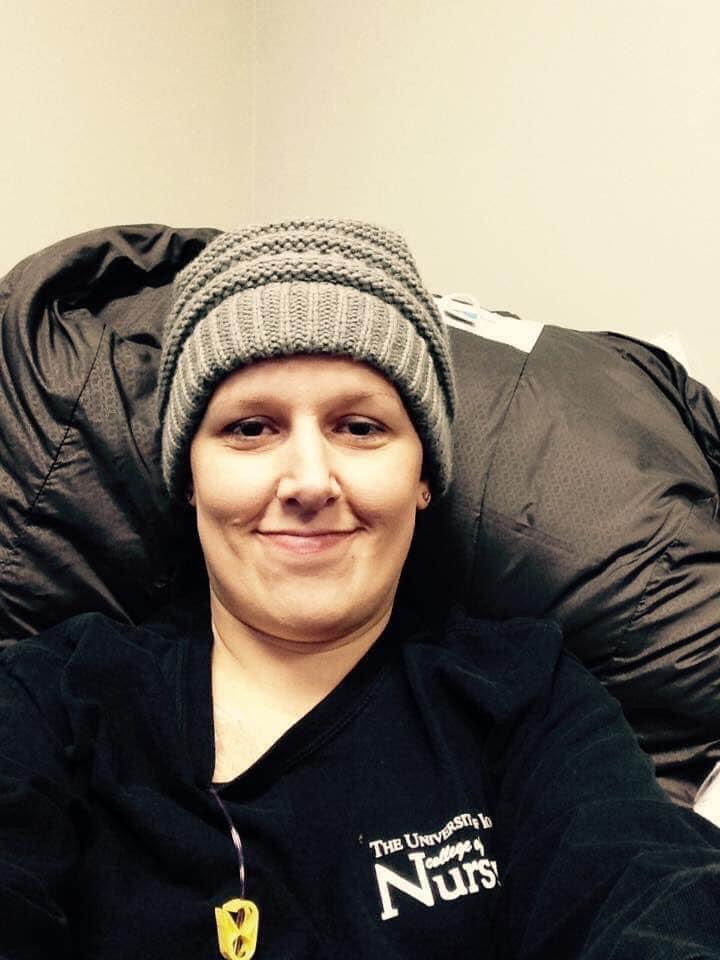