My story is not all that different from many others. It began with two-year-old me not feeling well and my mom taking me to the pediatrician on a Monday. They diagnosed me with an ear infection and gave me antibiotics. On Friday, still not better, my mom asked my dad if they should let the doctor take another look at me. In my mom’s words, “Something’s not right with my little girl.” Fortunately, the doctor ran a platelet test. My results were so off the charts that she also ran the test on herself to make sure the machine was not broken. My parents and I had been asked to go back out to the waiting room where the doctor came out and told them, “You need to take Allison and go straight to the hospital. Do not stop at home. If you think you can’t do this safely and quickly, I will call an ambulance. The oncologist and hematologist will be waiting for Allison.”

They made sure my older brother was taken care of at a neighbor’s house, and we went to the hospital. There was a medical team waiting for us, and they started all the tests. The results, which everyone was hopeful about, kept returning without positive information. The next morning, the oncologist told my parents the words they thought they would never hear, “Your daughter has cancer.”

There were more tests over the weekend, including my first spinal tap along with transfusions of blood and platelets. I was diagnosed with acute lymphoblastic leukemia (ALL) with a rarely seen chromosomal translocation. We found out later that I was only the third person at the time in the world to have my exact diagnosis. I spent 120 nights in the hospital during the first six months while I was being treated and was given less than a 10% chance of surviving. My doctor told my parents that if they had waited over the weekend to bring me to the hospital rather than on Friday night, he would not have been able to save me.

I am now a soon-to-be 26-year leukemia survivor! Because the leukemia deposited in my brain, the massive amounts of chemo killed the leukemia, but the scar tissue that remained left me with a seizure problem I have dealt with all of my life. Two experimental brain surgeries helped stop almost all of the seizures, and I was finally able to go away to college and earn my degree. I now have my own really great apartment and a terrific job.

I am not just a survivor, but I am also a thriver!  I’m committed to The Leukemia & Lymphoma Society’s (LLS) mission and helping to find a cure for cancer. I hope that no one else has to go through what my family and I had to go through. I was LLS Greater Sacramento’s (now LLS Central California Chapter) first girl honoree for the Man, Woman of the Year Campaign in 1997. I also ran and won the LLS Greater Sacramento Chapter Woman of the Year in 2020, the first girl honoree to run and win as a woman of the year candidate anywhere in the country. My several lobbying visits to Washington, D.C. have also been rewarding. Telling my story to members of Congress has helped to get important legislation for cancer patients passed, including the 21st Century Cures Act that was signed into law by President Obama. 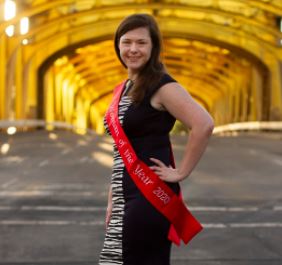