Against All Odds, Eevie Turns 1!

A first birthday is always a big occasion, but for Eevie, it's taken on a whole new meaning. She was born with a rare leukemia that gives her a 17 percent chance of surviving to age 2.

Even her parents weren't sure she would make it this far.

"We didn't think she would still be here. The odds were never in her favor," said her mom, Brynne.

Eevie was born with congenital acute lymphoblastic leukemia (ALL), an extremely rare condition affecting 1 in 5 million newborns. She will have to receive chemotherapy until age 2. 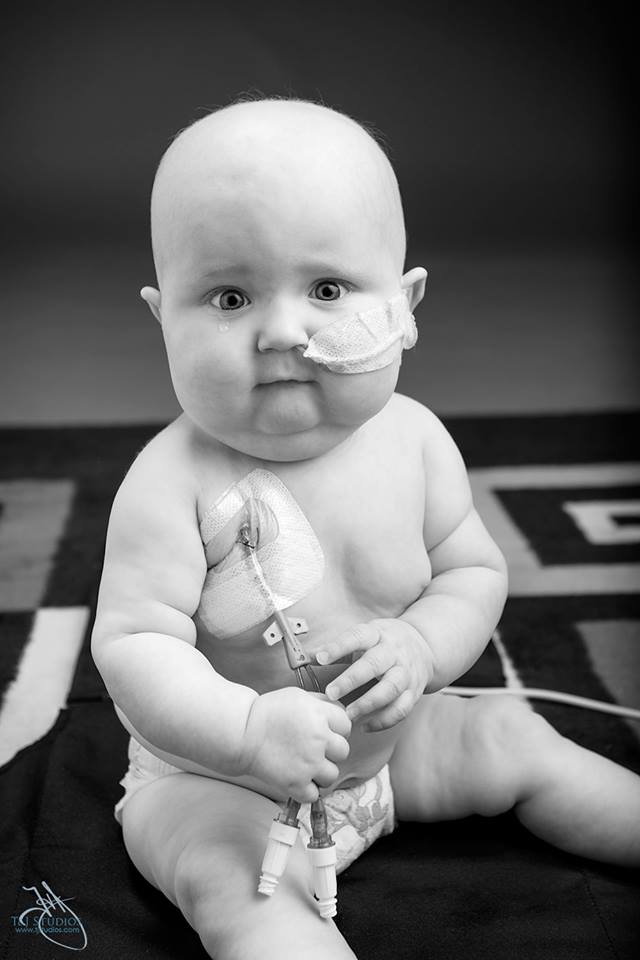 Her parents noticed unexplained bruises on her body when she was born, and tests showed low blood sugar levels and white blood cells nearly 38 times higher than normal. Within 24 hours, the family was on the pediatric cancer ward at Children's Mercy Hospital in Kansas City. They ended up spending the next seven months there, living at the Ronald McDonald House.

When Eevie was first diagnosed, her parents discovered her name meant "life warrior." And they quickly learned that's what she is.

It's been a year filled with repeat rounds of chemotherapy, spinal taps, cardiac issues, blood tests, pneumonia, and infections. At one point she had a 50 percent chance of making it through a procedure; another day she stopped breathing twice. Her parents even began planning her funeral after doctors misread test results and told them she had two types of cancer and wasn't in remission after all.

"No matter what they do to her, she recovers out of nowhere and she's always smiling," said her dad, Ryan. "Everyone has been blown away by how much fight she has."

Their idea of normal has had to change. It's hard watching other kids with no central lines or feeding tubes play in a pool. They can't travel because they'll be too far from a major hospital, and people don't visit because Eevie can't protect against infection. But they play with their dog, go to the zoo and take neighborhood walks. They can even go to a restaurant if it's 5 p.m. on a Tuesday and Eevie can be wrapped up in her car seat as a "real life bubble girl."

Yesterday, however, they got to celebrate a milestone - Eevie's birthday. It was an event they were afraid to even plan until a few weeks ago.

Eevie couldn't actually eat her three-tiered tiger-striped cake because of her feeding tube, but she did get to destroy the "smash" layer and bounce in her seat to the Mickey Mouse Club theme song. Her parents invited about 150 people in the Wichita, Kansas area - "anybody and everybody who shared in her story and has been touched by her life."

"We're thrilled about her first birthday, but pretty scared when we think about her second," said Brynne, who noted that if Eevie makes it to 2, she has an 85 percent chance of survival. She would still face a high risk of other cancers, but they prefer not to think too much about that.

If there’s one thing they've learned, it's to take it day by day and live in the moment.

The family tries to focus on the positivity Eevie has put out into the world despite all her suffering. The community has rallied behind them with fundraisers and support, yet the gravity of the situation often becomes overwhelming.

That's when they look at their feisty little girl and think of how much she’s been through already. They just have to keep going - one day at a time.