Our beautiful Janiyah was diagnosed with acute lymphoblastic leukemia (ALL) at 14 months old.  Some will say by chance or luck, others say by the grace of God. Thirteen months earlier, Janiyah was diagnosed with hemoglobin C disease; simply defined as chronic anemia. We were referred to a hematologist/oncologist by her pediatrician where her hemoglobin was to be monitored through regular complete blood cell tests (CBCs) and she was given iron supplements to maintain good levels.  She was doing just fine, growing and developing beautifully and was expected to be able to lead a perfectly normal life with occasional low iron levels.

A few days after Janiyah’s first trip to the beach, we noticed a rash on her legs. We chalked it up to heat rash or some irritation from the sand.  A few weeks later the rash hadn’t gone away so we mentioned it at her next CBC appointment. Her hemoglobin was a little low, which wasn’t a big concern, but her white blood count was elevated. This was not something that had come up before. She hasn’t been sick; she’s been as energetic and happy as always. Maybe the rash is viral and her body is fighting to get rid of it. To be sure, we were sent for additional blood draws and testing and scheduled for a follow-up appointment two days later.

Our world was turned upside down at that appointment. I knew something was wrong from the horrible pain I had in the pit of my stomach for two days. I remember that everything seemed so quiet in the busy doctor’s office and I remember the concern on his face when he came in. EVERYTHING was different from the dozens of appointments we had been to at this office over the past year.

All I knew was that it meant my daughter had Cancer.  All I knew about children with Cancer were the heart wrenching pictures on those St. Jude’s commercials. I knew kids with Cancer die.  The last thing I said to the oncology team before we were hustled directly to the oncology unit at the hospital was “I am NOT going to bury my baby” and the last thing they said to me that day was that I would not. I can’t say that I believed them just yet but I had to be sure that they understood what my expectations were from the gate.

We spent that first night completely numb. I remember her first nurse, so kind and loving, so reassuring.  He told me he had been at this very hospital for more than 20 years and that we were in a good place. That our baby would be great!! We had to call our employers since we wouldn’t be reporting to work the next day and ask immediate family to make arrangements for our 4-year-old son because we had no idea what to tell him. He adored his baby sister and was SO proud of her. Everyone was so sad and shocked but voiced their love and support immediately.

Janiyah started treatment the very next day, with her first lumbar puncture and bone marrow aspiration, as well as chemotherapy administered directly into her spinal fluid.  She got sick for the first time, which I think was when reality set in. My baby was vomiting from chemotherapy. I didn’t think I could endure this. We met with her oncology team again and they went over her treatment plan and told me that she had an excellent prognosis since she was since she was diagnosed so early. Had it not been for the hemoglobin C disease and regular blood draws, she may not have been diagnosed until a much later stage. She had an 85% chance of survival and this number would have been greatly reduced the longer she went without treatment.

We met the pediatric oncology support team (POST) who were all so kind and empathetic. I felt slightly rejuvenated. We were given an amazing chance, and then we were given her “roadmap” or treatment plan. However, looking at all the medications, the doses, the frequency, the  side effects, I was immediately defeated again. So you want me to pump my baby full of all of these medicines to break her down and this will build her back, healthy?  She had her infusaport surgically implanted the next day and we were to officially start our fight that afternoon. I couldn’t watch her first treatment.  The nurse wore a splatter mask, chemo gloves and a gown for protection from what they were about to put into my baby.  I wanted to scream at the top of my lungs and grab my baby and run far, far away.  I wanted someone to run in and say “Wait!  It’s been a mistake! Take your baby home, she’s fine!” But no one ever did.

Despite several complications, including shingles, infusaport failures and surgeries, fevers, pneumonia, and an anaphylaxis reaction to one of her chemo medications, Janiyah has been in remission since September 11, 2012 and continues to respond well to treatment. She is now lovingly known at the doctor office and St. Mary’s oncology floor as “The Diva Princess” or “Baby J” and is truly an inspiration to so many.

She is so brave at her appointments that we filmed her getting her port accessed for treatment to lend some support and calm the nerves of a few new patients. We tell them if Baby J can do it, you can too!  Janiyah still has two years of chemotherapy left and cannot attend daycare due to her compromised immune system. With the support of the nurses, doctors and the pediatric oncology support team, we explained everything to her older brother, Zayden, who continues to be her biggest advocate. He had a very hard time in school and at home with us being away so much and continues to have bouts of anxiety when his sister has to be hospitalized. He has asked if he is going to get Cancer too and why God made his sister’s blood sick.  It’s hard on the siblings too.  He now happily tells everyone that his sister has Cancer but she is beating it!  He is just as well known throughout the oncology family and often stays with his sister through her treatments and visits to the doctor.

With only 12 weeks of FMLA leave through my employer, I was unable to return to my position and now care for her full time at home.  The loss of income has been devastating to the family and with the medical bills that come in, it is stressful but, we lean on POST, as well as the other oncology families and the amazing nurses for support and ears to listen.  We also try to live by the motto “It can always be worse.” I can honestly say that we could never be as positive as we have been had it not been for the confidence of the entire staff at Palm Beach Children’s Hospital! Their love and support every step of the way has been invaluable. 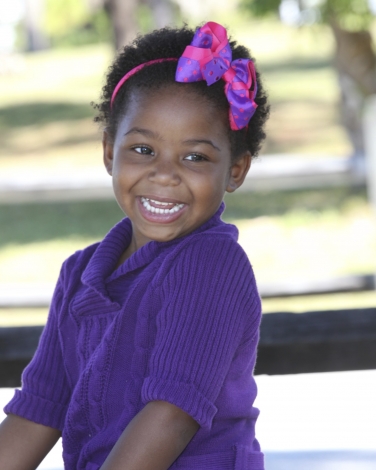