I was diagnosed with Burkitt lymphoma (BL) on Friday the 13th ― August 13, 2021, to be exact ― seven months after being married, three months after my wedding reception, and going on my honeymoon.

After we got married in January 2021, my wife and I moved into our first apartment in March. Soon after moving, I felt a lump in my neck, and I also started feeling more tired and had a pain in my stomach. Being overweight, I attributed the symptoms to being out of shape, so I started exercising. I wasn't able to move as much, and I kept getting winded after doing simple things like going up one flight of stairs to our apartment. I come from a family of diabetics, so I feared that I had become diabetic. We had recently moved five minutes from a Houston Methodist Hospital branch, so I decided to go there. After bloodwork, the only thing they found that was “wrong” with me was my anemia and high blood pressure. In passing, I mentioned to the doctor about the lump in my neck, and she felt it and told me it may be nothing, but I could pursue it further and get an ultrasound done. After an ultrasound revealed it was indeed a tumor, we scheduled a CT scan. But in the middle of all of this, we also had our reception and honeymoon planned, so I pushed the CT scan back a month.

After my CT scan, I didn't receive my results for an entire month from my doctor, but once I did, she suggested a biopsy. I had the tumor removed on August 6, and a week later the surgeon called me to give me the news. I was devastated, but it all started to make sense. All the symptoms, all the pain. I was referred to an oncologist at the HMH branch, but she said my case was too severe. I needed to make the 45-minute drive to the Houston Methodist Hospital location at the Texas Medical Center.

I had my first PET scan on August 23, and then it all REALLY made sense. I had tumors in my left armpit and all throughout my digestive tract. My oncologist, Dr. Pingali at Houston Methodist Hospital in the Texas Medical Center, did not want to let me go home. He did , though, since I had my appointment to freeze my sperm the following day. I didn't make it to that appointment. The weight of the situation and the pain I was in were enough for me to call him, and my wife brought me to the ER at 3:00 a.m. on the 24th. That morning, I thought my life was over. My hemoglobin level was a 5, I had blood coming out of nearly every orifice in my body, and the pain in my stomach was unbearable.

I spent the better part of seven months in the hospital. I did the R-Hyper-CVAD protocol ― eight rounds, four-five days each in the hospital. My first round lasted 17 days as they had to nurse me back to health to even begin chemotherapy.

My wife and I both continued to work during all of the back and forth, from the hospital to our apartment, to two bloodwork appointments a week. We even bought our first house in between chemo rounds. Even today, I do not let this define me, it will always be a part of me though. I don't know how long I will feel the mental and physical effects of it all, but I know that if I can beat stage 4 BL, I can do anything.

On April 22, 2022, I had my first post-treatment PET scan, and it revealed no signs of cancer. I am now in remission.

I use this lesson to tell every young person to go to the doctor, even if you think it's minor. It all started with a slight pain in my stomach and what felt like a cyst in my neck. Had I not gone to the doctor, I would not be here today.

I would like to express my gratitude to The Leukemia & Lymphoma Society (LLS). Throughout treatment, seeing stories of those who made it through gave me strength. And to my wife, who spent every second by my side even when things were hard. She managed to not only take care of me but also worked 40 hours a week to keep advancing her career. Also to my parents who supported me in every aspect and made sure I always had what I needed, and friends and family who cooked me meals and just gave me the support I needed. Lastly, thanks to the best hospital in the world, the Houston Methodist Hospital, with its world-class doctors, nurses, and staff. They saved my life, and I am eternally grateful. 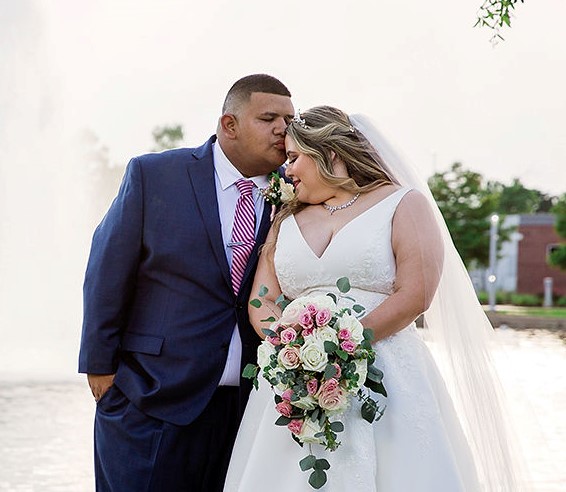