The body is ultimately wise. Through this most recent medical ordeal, I learned to listen to what my body was telling me. In 2018, I felt symptoms above and beyond the fibromyalgia ailments that I had been plagued with for 25 years. I had unusual inflammation despite eating healthy and walking on a regular basis. I developed an unrelenting throb of pain in my lower back. My internal medicine doctor at the time dismissed my complaints. He told me that I was being hysterical when I detailed my complaints and belligerent when I calmly explained to him why I did not want to go on one more fibromyalgia prescription. I learned to listen when people, even a doctor, were not taking me seriously.

At the time, I was touring rigorously as a poet and teaching artist, but when I returned home, I found a new medical practice and started seeing an understanding and stalwart researching nurse practitioner. She took me seriously. She told me when I got off the road in three weeks that she would do blood tests. Good as her word, when I returned, she had scheduled me for labs. I almost did not go because I got home on a Saturday. The last thing I wanted to do was show up for early morning blood work on Monday. However, that Sunday I had gone with one of my twin daughters, Amber, and grandson to a little carnival in the next town over. We had a lovely time getting fake tattoos and buying cheap souvenirs. Julian and I had our joint caricatures done. When it was time to leave, I remember not being able to walk all the way back to the car in the parking lot, maybe 500 meters to 750 meters away. I normally would have made this jaunt without a thought. I played it off to not alarm Amber. Halfway there, I said, “Let’s just sit in the shade of this oak and enjoy the moment of the festival a little longer.” We did. We had the best time talking about the moments we loved best. Julian liked the kiddie rides and the animals. We all compared our tattoos and took pictures of them. The moment was meant to mask how tired and out of breath I was. We eventually made our way back to the car. That out-of-breath moment made me rise the next morning. This is when what my body had been telling me all along came to fruition.

After the blood tests, my patient portal began coming back riddled with capital Ls and Hs on the laboratory tests. It was a first for me. I once had high cholesterol a year before but never anything this overwhelming. My nurse practitioner called me and wanted me to do a 24-hour urine test too. She thought it was anemia and kidney disease. She said she would keep researching. I had begun doing my own research when I saw the monoclonal spike. I was alarmed. Where WebMD comes back with a myriad of choices, it only came back with one: multiple myeloma (MM). I had never heard of this cancer before, but I read up on it before I went to my doctor’s visit. Amber and my 85-year-old mom accompanied me. I did not tell them about the MM. When my nurse practitioner walked into the office, she had tears in her eyes. I only responded, “I already know. What’s next?” Luckily, she had the next steps.

She eventually referred me to an oncologist who officially confirmed that I had blood cancer, stage 3 MM. I was treated with chemo and other medications for seven months to prepare me for a stem cell transplant. I flew to Houston for a second opinion. They concurred. It has now been 2 ½ years since diagnosis. Through high-dose chemo, through living through a pandemic, I am worse for the wear. I lost my mobility, some cognitive function, and my appetite, but I am on the other side of healing and recovering.

With my family, doctors, and nurse practitioner, I have come through it. It has not been a straightforward path to healing, having had pneumonia that almost killed me twice. And the stem cell transplant was grueling.

I am not fully back on the road, but I have a toe in the outward working world again with the National Student Poets Program as their Mentor Poet, Cohort producing a Choreopoem for the Theater Alliance about women in the pandemic and conducting various keynotes and upcoming workshops for the Kennedy Center for the Performing Arts.

My body keeps talking to me. I listen more intently. When I am tired, I rest even if it is in the middle of the day. I listen to its complaints and its praise with a finer ear and heart. Throughout the process, I was being stuck and prodded with needles for blood, IVs, and bone marrow biopsies, but I never put my writing pen down. I wrote my way through with poetry and prose. Additionally, I have one chapbook and two books being published in 2022. This may seem like a harrowing schedule, but I pared it down. I am a Type A poet. I traveled many miles and to venues locally, regionally, nationally, and internationally taking the gospel of poetry and storytelling to the masses.

Again, a deep listening has carried me here. I slowed down. I gardened. I rekindled my love for birds in my backyard. I taught my grandson how to play checkers, Concentration, and Chutes and Ladders. Forgive the alliteration; it is an occupational hazard. My body, my intuition ― no matter the trials and tribulations and the litany of losses of others and my former speed and way of life ― my body speaks. It says, “Bloom Anyhow.” 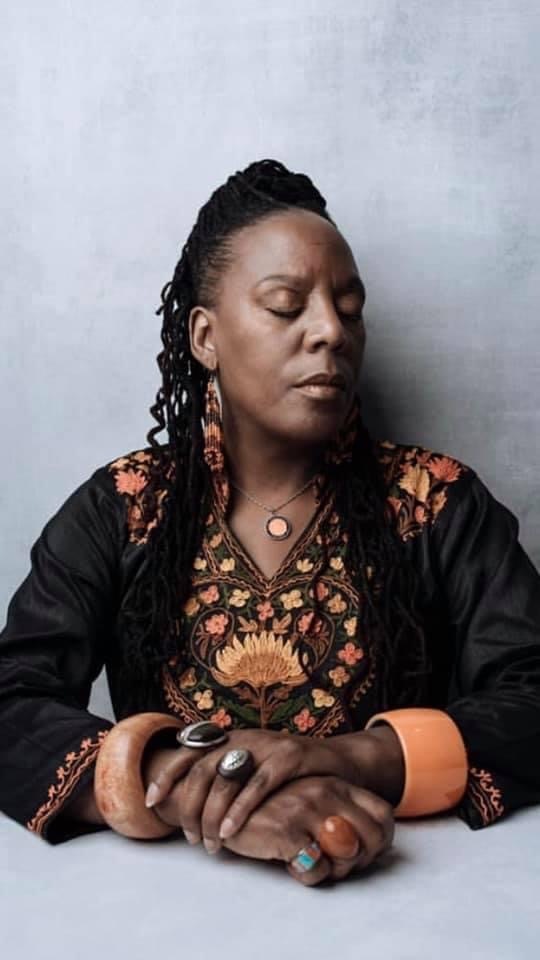