I came into this world with a 65,000-mile warranty. During all my life, maybe I had a cold once in a while, some minor stuff, a bit of bursitis, but nothing that you would consider life-threatening at all. One day during a routine exam, I had blood work done. My PCP told me she didn't like my white blood cell count, and it was best to have a specialist look at it. She referred me to an oncologist. I didn’t think of it much, and since I was feeling fine, I thought it must be nothing of consequence. Then after further testing, I was eventually diagnosed with something called myelofibrosis (MF) and chronic myelomonocytic leukemia (CMML), sort of a double whammy, and from what I understood, not a very common disease.  Then came a series of bone marrow biopsies and transfusions. My oncologist had suggested a stem cell transplant as the only realistic option to save my life. It was then that I visited the University of Miami Sylvester Cancer Institute and got all the information on the transplant procedure. After checking my clinical history, the transplant specialist concurred that a transplant was my only option. I went ahead and agreed for them to begin a search for a match. However, one of my daughters insisted on getting a second opinion, and we went to Moffit Cancer Center in Tampa. The doctor there also suggested the transplant. In the interim, I took new medicines to slow down the progression of the illness, which didn't do much so we stopped it after several months. Later we tried a brand-new drug recently approved by the FDA which I insisted on taking to see if I could forego the transplant since there were encouraging studies that there was remission in certain cases. Unfortunately, after taking it for about a month, I developed cellulitis in one eye which caused me to be hospitalized. During my three-week stay, I also got it in the other eye. I came close to losing my eyesight, but fortunately, I did not. Obviously, the medicine was suspended. From then on, there were about six or seven months of chemo and transfusions. It also was the time when The Leukemia & Lymphoma Society (LLS) helped me with the cost. It was certainly a blessing since it was truly a financial burden for my wife and me since we receive only Social Security. We shall forever be grateful.

We registered with bethematch.org and had our family and friends register for future stem cell donations since none of them was a match for me. Maybe they could help someone in the future in my name.

In May 2020, almost a year into the search, I was advised that they had found a match, not the ideal 10 out of 10 genetic compatibility but a 9 out of 10. It was up to me to give the go-ahead. It was at this moment in my life when I had to weigh my choices: continue on chemo and maybe live six months to five years or take the odds of the transplant which has a success rate with 9 of 10 of around 65-70%.  I also had to weigh my personal feelings which were mixed at the time for various reasons. After a week or so of soul-searching, I made the decision to go for it. On July 13, 2020, I was reborn. This was the day some selfless and wonderful person donated their stem cells so that I could live. Many months later, I was told that the person lived in Europe. They had flown the cells in a frozen tank all the way to Miami. I hope someday (generally after two years) that person will allow me to meet him. I have gone over it in my mind many times ― hug him, kiss him, and call him my brother. What words can I say to someone who gave me my life back?

Like the Beatles song, it's been a long and winding road. There were many moments of feeling terrible, many transfusions, and many pills, yet it was all worth it. Once I made the decision to embark on this journey, there was only one road, and that road was LIFE. I was going to achieve it no matter what. A positive mental attitude is your best ally. It is 50% of your recovery. Your body will do the rest.

I have been so lucky to have the support of my wife, both physically (as my caregiver) and her love, and also the support of my children, grandchildren (especially my youngest), and my great friends. There was no way the transplant was not going to work for me.

A year and a half in, I have not recovered completely, yet every day I am better and living a normal life, doing things in my apartment like painting the kitchen, putting in a new backsplash, and buying new cabinets for the bathroom which I plan to install.

I promised myself that when I felt well enough, I would help educate other candidates for transplants on my experiences and the resources they can avail themselves of like LLS and bethematch.org. Every Thursday afternoon, I join a Zoom meeting with the Sylvester Cancer Institute and talk and encourage them that they can do it also. 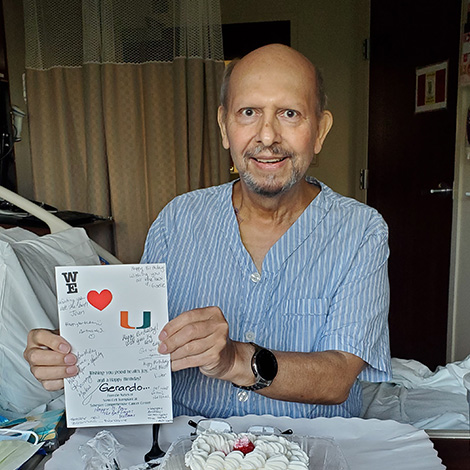