My story begins almost 24 years ago in 1996, when I was diagnosed with cancer, chronic lymphocytic leukemia (CLL). Back then, there was no cure for CLL except for a bone marrow transplant (BMT), but that procedure only had a survival rate of 50%, not very attractive odds. My prognosis was I had anywhere from six to 15 years without a BMT.

It turned out I was pretty lucky, I didn’t require a lot of intensive treatment for a number of years, but by 2010, 50% of my bone marrow cells were cancer cells and the CLL had become resistant to standard therapy. It was now the spring of 2010 and I was running out of options. It was at this point that my oncologist, Dr. David Porter, at the University of Pennsylvania, sat me down and told me I was a good candidate for a new clinical trial that would use my own white cells to kill the cancer cells. I was definitely in because I saw it as a chance to finally fight back, to not just be a victim of my cancer – and so I became "Patient Number 2" in the CAR-T 19 clinical trial.

In September 2010, I received the infusion of my new white cells that had been “trained” in a University of Pennsylvania laboratory to recognize my cancer cells. I was eventually hospitalized for a few days to treat issues caused by the high number of cancer cells dying. After I was released from the hospital and less than four weeks after the first infusion of my “trained” white cells, I was sitting in an exam room at with Dr. Porter. He said, “Doug, we can’t find a single cancer cell in your body, your bone marrow is completely free of CLL”. It was then, even though there were no guarantees, I decided to declare victory. I had won and could move on with my life.

I had my nine-and-a-half year checkup a few months ago, and I am still cancer free. I have three wonderful daughters-in-law, three terrific grandkids and my nine-year-old daughter is now 32 and committed to helping those less fortunate than she. I started distance running with my kids after my “miracle cure” and have now completed six half marathons.

At the same time I started training for my first race, I also started my involvement with The Leukemia & Lymphoma Society (LLS) when l learned that it was LLS that provided some of the funding of the research and the clinical trial that saved my life. I wanted to find a way to give back – to help other cancer patients.

My first introduction to LLS was training for the LLS Patti Robinson Kaufmann First Connection Program. I subsequently became involved in the LLS Advocacy program and joined the Eastern, Pennsylvania Board of Trustees. It has been an absolute joy working with the wonderful people at LLS and LLS volunteers to raise funds to support patients and support research dedicated to finding the cures that will end blood cancers.

The most rewarding role with LLS has been the First Connection program and the opportunity to talk to cancer patients who are looking for support. I found that the main job of a First Connection volunteer is to listen. The role is also to answer questions from the perspective of a fellow cancer patient, but mostly to listen and to provide hope. Thank you LLS for all that you do and for caring. 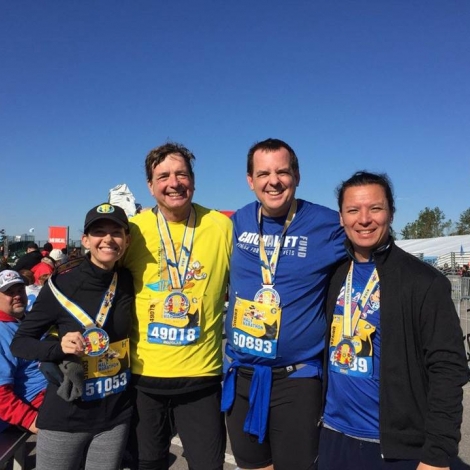