Amos is 6 years old and has been in treatment for leukemia since September 2017.

Three weeks after his very first day of kindergarten, he was diagnosed with Acute Lymphoblastic Leukemia (ALL). Amos spent a month in the hospital for the initial induction phase of his treatment, and then was homebound for 9 more months while he continued his intensive chemotherapy regimen. His immune system was so compromised that he could not attend school or be in public spaces. He received tutoring from a teacher twice a week at home.

In July 2018, he was taken off of house arrest and was able to be around other children again. He attended some summer camps and in August 2018 he was able to return to school as a first grader. He continues to receive regular chemotherapy treatments. When he gets sick, he is admitted to the hospital again and has to miss school for a few weeks until he recovers.

Amos has 5-year-old twin brothers. They just finished their kindergarten year and they think the world of their older brother, the cancer warrior. To be honest, they wish they had special ports in their chests and had a reason to spend time at the hospital, too. Amos’ parents, Heather & Nick, are in awe of Amos’ glowing, positive attitude in spite of all he has been through.

Amos loves creating with legos, drawing comics, reading, and playing on the playground. He also loves playing make-believe with his brothers and teaching them how to do stuff.

Amos’ prognosis is good. If Amos continues to respond well to his treatment, he will undergo chemotherapy through year-end 2020. 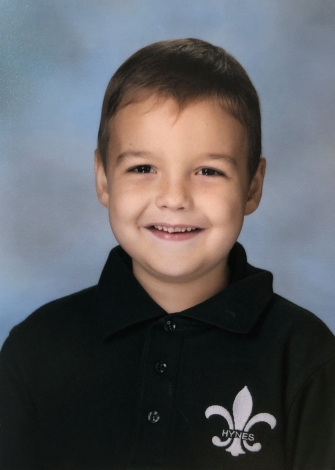