On December 23, 2018, our lives changed forever. And sadly, it was just the beginning.

I was assigned to work a night shift an hour away from where I dropped my son, AJ, off at my sister’s. I got a call from her two hours later. She said AJ was not feeling or looking well. My sister, Kyesha, took him to the emergency room.

I rushed out, put my emergency lights on, and drove an hour to the hospital. When I got there and saw my son, I didn’t know what to think or say. Tears started rolling down my face. AJ looked almost dead; his color was so blue.

The nurse approached me saying, “He is so cold, and we can’t get any blood from him. We’ve tried everything. We’re going to have to rush him to Arkansas Children’s Hospital.”

All I can remember is a nurse grabbing me, saying, “Pray for your son NOW, and pray he makes it up there.” I was so numb. I had to drive all the way back to Little Rock where I had just come from. And I needed to try to be there before AJ got to the hospital. As I was driving over, there was a huge car wreck in front of me, and I just thought, “Oh my gosh, what can happen next? I need to get to my son.”

I remember praying as I drove. I called a friend and asked her to please meet AJ at the hospital because I wasn’t going to make it there in time. When I got to the hospital, AJ still looked blue. His eyes were more open, and they had heat on him, trying to warm him up so they could get blood and have labs done to see what was going on.

It took around two hours to finally get blood drawn. The doctor came in late that morning and told me he thought AJ might have leukemia. He wasn’t sure yet and was going to run some more tests.

We found out on December 26, 2018, around 4:00 p.m. He had leukemia. The doctor told us we would need to stay there until AJ’s temperature was better. After three weeks, he was still running a high fever and still wasn’t able to go home.

I noticed AJ wasn’t eating much anymore, not even popsicles. He kept digging in his nose, not like there was a booger in there, but like it was itching. And before his lip got swollen, he kept constantly licking his top lip over and over. I remember it like it was yesterday. I did everything I could for my son (besides giving him his medicine).

For a whole week I would tell the nurses, “AJ has a strong, stinky smell coming from his mouth. I brush his teeth, but it still smells awful!” The doctors who were on call didn’t take my concerns seriously.

For weeks my son’s top lip was swollen. The doctor thought he was allergic to an antibiotic they were giving him, so they decided to give him Benadryl instead. It helped his lip go down a little bit, but hours later, it came back up even more swollen. The next day it got even bigger. Later that night, around midnight, his top lip started bleeding.

My sister went to the front desk to let them know. I waited 20 minutes for his nurse to come. I got frustrated. I had seen nurses just sitting around doing nothing. I had to give some attitude before one of them got up, FINALLY believing it was serious. They did a med call and came down to check his airway. They didn’t see anything bad enough to move him to ICU, but they did put oxygen on him.

Around 6:00 a.m., doctors came into the room and saw how his top lip had turned black. They immediately moved him to the ICU. I will never forget his first day in the ICU. Dr. Richter said, “I have to remove his top lip. If I don’t, it will fall off on its own anyway.”

I felt like my heart stopped. I was crying so hard. A nurse asked me if I needed to leave the room. “No, I’m NOT leaving my son.” A week later, he went down for multiple surgeries and procedures to remove his top lip and make sure the infection wasn’t spreading.

They had to sedate my son for almost two months. He was fighting for his life and fighting the infection until it was completely gone. I didn’t recognize him at all, his face was so swollen. Half his face was gone, and he reminded me of a zombie. Every day I felt like I was dreaming. I don’t know how I was still standing.

I will never forget Bailey, our nurse. She was a pro at making sure AJ, Kyesha, and I were all taken care of mentally and physically. She was our lucky charm while he was in the ICU.

We all know God can make miracles happen. All of the sudden, while he was still in the ICU, they told me he was in complete remission! They had never seen cancer go into remission so fast! The doctor laughed and slid the paper to me so I could believe it. He would be able to leave the ICU!

AJ hadn’t had any chemo for two months straight. That day gave me hope. My son had another chance.

A week after leaving the ICU, things went back downhill. He started throwing up blood and couldn’t hold down any kind of formula through his G-Tube. They had to do an emergency call to the surgery room to look inside his stomach.

They said his body was going through so much stress while in the ICU that they would need to go inside his body and clamp certain areas. Once it was taken care of, his nutrition doctor had a hard time finding a formula that fit his body. When she finally found one he wouldn’t throw up, she assigned it to him. Two weeks after he had gotten used to the formula, a nurse gave him the wrong one accidentally. He couldn’t hold it down before he started throwing up again.

His nutrition doctor happened to walk by and notice the nurses had been giving him the wrong formula for a few days. After getting a call from my sister (she was watching him so I could go home and take care of some things), I had to rush back to the hospital. I was so angry they weren’t more careful after everything he had been through! They still, to this day, can’t figure out who gave him the wrong formula.

When things got better for him, I had to get trained on his tracheotomy, knowing how to change it out once a week and how to clean his neck the proper way. I was so nervous. I had never had to deal with a trach before and was hoping AJ would never try to pull it out of his neck.

After I was fully trained and AJ was improving, they wanted to make sure he got discharged before his birthday on March 26. We contacted Fox 16 News and got in touch with a lady named Susan. She was amazed by AJ’s story and wanted to record us on the day we left.

We finally got discharged on March 23. It was the best day we’d had in ages. After being in the hospital for so long, there was a lot of crying and loving moments for the news to capture as we exited. AJ was so happy! He knew we were finally going home.

After being discharged, we still had to make a lot of trips to the hospital for his chemo and physical therapy appointments. On September 23, we received the exciting news he was finally in “complete remission.” In October, his hair started to grow back

We met up with Dr. Richter, the one who saved his life (other than God), who told us he would be doing AJ’s plastic surgery in April of 2020 with someone he went to school with. I met with both of them so they could explain what he was going to look like and every detail of what they planned on doing with his lip. They were going to do a surgery called an abbe flap on July 27, 2022.

He is currently deaf as well, but we are still pushing and leaving it up to God for where it goes from here. We plan to inspire others with his journey and help the best way we can. 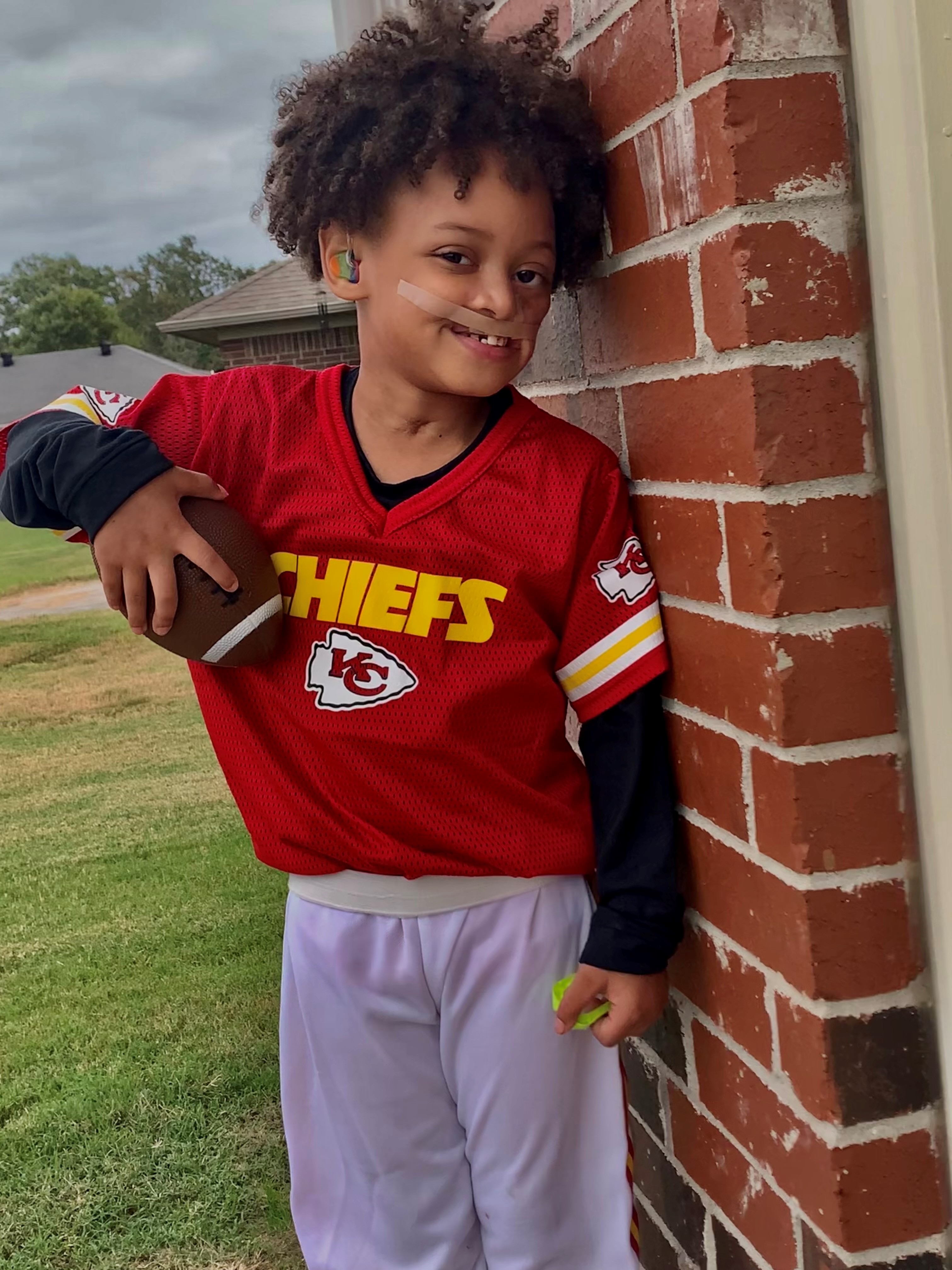