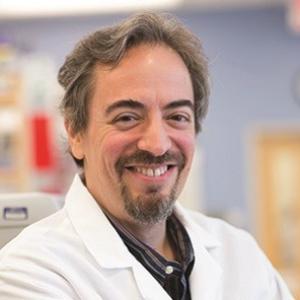 This project is the first to explore the origin of a newly discovered type of lymphoma called “BN2-DLBCL”. Mutations in a gene called “SPEN” are a defining feature of these tumors. Strikingly, SPEN mutations are more common in females and cause more deadly disease. Our proposal will reveal for the first time how these tumors originate from the immune system, how they are intimately linked to autoimmune disorders such as Lupus, why they occur preferentially in women, and how to cure them.
Lay Abstract

Recent studies identified a new and previously un-recognized type of aggressive lymphoma called BN2-DLBCL. These tumors uniquely have genetic mutations disrupting a gene called “SPEN” that are more common in females and associate with more deadly disease. Strikingly, our data so far suggest that these lymphomas arise from a new discovered type of lymphocyte called “pABC cells”, which normally form part of the first line of defense against blood borne and gut microbes. Our data suggest that SPEN alters these cells through an entirely new and very surprising molecular mechanism linked to sex chromosomes. Specifically, women have two copies of the X chromosome, although one of the two copies is normally shut down (silenced) in mature cells due to the presence of a special type of RNA (called Xist). However, pABC cells are highly unusual in that they do not have “Xist”, which puts the second X chromosome in danger of “re-awakening”. Our data suggest that SPEN normally protects against this but when it is mutated, the silent X chromosome “wakes up” and produces genes that cause these lymphocytes to become highly and aberrant reactive to low grade inflammatory stimuli. We believe that this leads to development of autoimmune diseases such as Lupus, and the initiation of SPEN mutant BN2-DLBCLs, diseases that are far more common in women than men given the link to X chromosome. Herein we will track the development of these hyper-reactive pABC cells to understand how they reprogram the immune system to initiate BN2-DLBCLs, will discover the precise molecular mechanism through which X chromosome awaking drives these pre-tumoral cells to progress into overt lymphoma. We will use this new knowledge as well as our already existing data to create the first specific therapy for patients with BN2-DLBCL, thus creating the first treatment specifically addressing a gender disparity in lymphomas. Of note, one of the drugs we predict will be especially active in these tumors (MALT1 inhibitors) was developed by our lab and is currently in phase II clinical trials. This is important also because patients with these tumors are generally older and unable to tolerate standard chemotherapies, so that development of these new and more targeted treatments will be both more effective and less toxic. It is well known that lymphomas (especially of the type studied here) are strongly linked to and often preceded by autoimmune diseases. Our study will explain why this is, thus solving a long-standing mystery in the field and at the same time providing therapeutic insights that may also benefit patients with autoimmune disease to potentially prevent them from developing lymphomas later on.