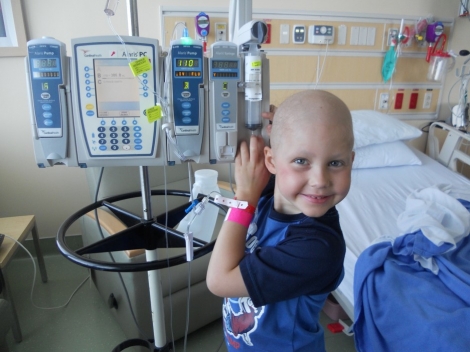 Zach Guillot was a normal, healthy, superhero-loving kid when he was diagnosed with acute myeloid leukemia (AML) at age five.

Zach endured multiple rounds of intense chemotherapy and a bone marrow transplant in 2010 with younger brother, Jake, as his donor.  Zach returned to normal life for a year and a half, happy and free of all medications, but his disease returned.  He endured more intense chemo and a second bone marrow transplant, this time from an anonymous donor, only to have his leukemia return just six months later.  He was running low on options and his survival chances were near zero, but did not want to give up!

Zach's family searched the U.S., turning over every stone, to find a path for Zach.  Ultimately, they moved to Seattle where Zach had greater access to clinical trials and innovative therapies.  There Zach underwent a third transplant, this time using donated cord blood.  While the transplant was a success, Zach died of chemotherapy toxicity weeks later.  His liver had reached its breaking point after years of treatment.

His family is committed to accelerating new approaches to fight AML, as cure rates are unacceptably low and today's therapies can be as dangerous as the disease itself.  While in treatment, Zach struggled with uncontrollable fevers, hours-long nosebleeds, numerous life threatening infections, months confined to the hospital, and skin burned, literally, from the inside out -- all therapy-related. And, even if Zach had survived, he would have faced a lifetime of late effects caused by chemo and radiation.

The Guillot family works tirelessly to "Beat AML" via their support and participation in several LLS campaigns and fundraising for other promising and less toxic treatments.