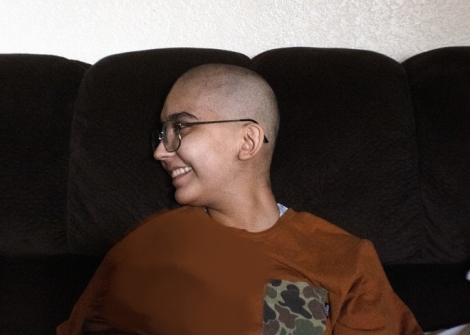 My name is Yesenia and this is my story. I began my first semester of university in fall 2017. While I was away for college I started experiencing some symptoms. It started off with nausea, after the first couple weeks of fall semester I would experience this sensation that left me bed ridden. This led me to go back to my family home so I could be better taken care of. I knew at that point that something wasn't right, so I took a trip to Urgent Care where I was told I was Anemic, but with a better diet I would go back to normal. The doctor noticed I was pale and had exaggerated dark circles around my eyes, and thought It could be something other than me being sick. I was sent on my way, relieved to think I was fine. Weeks had passed and my symptoms started progressing. I began to get sharp pains throughout my body, a feeling I had never felt before. It would be a while till I could seek out medical attention, but when I went back to Urgent Care, I was told that nothing could be done for me, they set me up with 10 mg pain killers and an appointment to see my primary.

After the appointment, it took a while for them to get the results back to me. I was told that I needed to see a specialist so they made the appointment, but it wasn't for 4 months that I would be able to talk to the specialist. I started experiencing constant fatigue, but I carried on with my day to day activities. School started becoming more difficult and my stress and depression started escalating. I finally reached the point where I could no longer wait to see the specialist and decided to go to the emergency room. It was two days after Christmas and there was a 6 hour wait. At this point I was no longer able to use my legs without screaming for mercy. I was in agonizing pain. The wait was too long for me and I was exhausted, so I ended up signing to leave. My mom had to carry my into the car, drive an hour to get home with me sobbing in the back seat, and carry my inside. I took about 1200 mg of painkillers that night, and not even that would help me what so ever.

At 5am we decided to make another trip to the emergency room. I waited an hour and a half. I got pain medications injected into me and tested for about 4 hours. They came up with the conclusion that I needed to see a specialist. I had about a week to go before I had the appointment to see the specialist, and I couldn't wait any longer. I was immobile at this point. My family could no longer wait for a doctor to see me, so they made the executive decision to seek help across the border. We took the trip from southern California to Baja California, to see if there were anyone who would try and help me. When we finally got to the hospital I was incredibly pale, and the doctor said that was her main concern. We were set in a room and I had some blood work done and I was put on fluids. I started feeling a bit better after being given pain medication, and finally was able to get a good nights sleep. The following day the results were in, and my parents were told that my wbcs were really low, and that it would be really easy for me to get sick. We were given an opportunity to stay and be taken care of, but we weren't financially capable to pay out of pocket with no insurance. We headed back home on New Years eve and celebrated the night.

At the stroke of midnight I was end up in tears from the agonizing pain. I woke up the next day with a fever. Things weren't getting any better and we decided to take the trip back to Mexico. There I was given pain killers to ease the pain, but due to the side effects I would crash whenever they were given to me. I got settled in for the night, and had specialists coming to see me the next day. I received an ultra sound and a bone marrow extraction in the day. By night the results were in, the doctor informed my parents that some of my organs were inflamed and that I unfortunately had leukemia. Knowing this information my parents were advised by the doctor to take me across the border and get treatment with my insurance. We ended up at a San Diego hospital where we waited in the ER for 3 hours.

I finally got admitted into the hospital, but spent the night on an uncomfortable gurney, because there was no rooms available. The next day I met with an oncologist where I would get yet another bone marrow extraction. That same day my family informed the hospital that the trip to see me was 2 hours, so they transported me closer to home. The hospital the received me had quite a few issues with my case. They had yet to receive the results from my bone marrow extraction, so I received my third bone marrow extraction that week. While I was awaiting the results I was put on morphine and slept for about 2 weeks straight. It was finally confirmed that I had ALL and that I needed to start chemotherapy as soon as possible. They found that my bone marrow was badly scared. That was just the beginning of my story. I from then on received chemotherapy and went into remission may of 2019. It's been quite the journey. I still struggle with PTSD, but I'm looking forward towards my future.