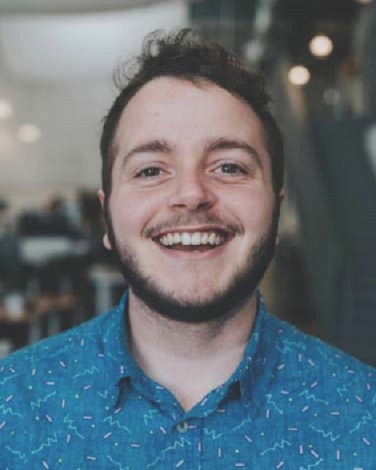 I am a 27-year-old transgender man who won a hard-fought battle with stage 3 Hodgkin lymphoma just after graduating from college. My story begins with a good friend. One night, we were hanging out around the house and they caught a glimpse of my neck under a particular light and said, “Hey, come here for a second, your neck looks pretty swollen.” We both looked in the mirror and noticed something protruding from the space where the left side of my neck met my clavicle. I called my doctor’s office and made an appointment for the next day.

That appointment was the first of many in which I found myself in a state of desperation for some kind of explanation, but my questions remained unresolved for several months. Multiple medical professionals downplayed my swollen lymph nodes as side effects of a gender-affirming procedure I had a few months prior. Ultimately, they weren’t concerned. They said there wasn’t much more they could do for me unless I went to consult the surgeon who performed the procedure. With seemingly no other option, I made an appointment to see my surgeon (who was fairly booked out, not to mention two hours away). Several months and numerous appointments later, I was diagnosed with significantly-progressed blood cancer. I began intensive treatment in September 2015.

Throughout my six months of chemotherapy and three months of recovery, my fight or flight responses simmered to a continuous dull roar. I worked diligently, only calling out sick twice. On my days off, I found freedom in biking down every street and stretch of Santa Cruz coastline. I felt every day so deeply. With the help of my family regularly driving up to Santa Cruz and a few immensely incredible friends, I fought surreal circumstances and found my own definition of resilience.

After 12 infusions of ABVD (well, mostly AVD once Bleomycin became too toxic for my lungs) and a few weeks of daily Neupogen injections to stir my immune system, I finished my treatment and was given a strong prognosis for recovery. I am incredibly lucky to be in remission today.

However, there’s some residual frustration as I’m often approached with questions expressing some falsely-perceived intersection of my cancer history and gender identity. Questions such as, “Was this caused by your transition?” and “You’re an unusual case, huh?” suggest a concerning lack of familiarity with gender-affirming care. They echo stories of some medical staff’s negligence of transgender folks, specifically those living with chronic or otherwise threatening disease (a phenomenon known as “Trans Broken Arm Syndrome”). While these trends can affect all of us, their impact is especially pronounced for transgender people of color, specifically Black trans folks, who navigate additional intersections simultaneously.

Since this experience, I’ve remained committed to raising awareness and building the knowledge necessary for providers to embrace us as patients, honor our identities, and protect our livelihood. It’s an ongoing practice; there’s a long road ahead, but I’m proud of how far we’ve come.