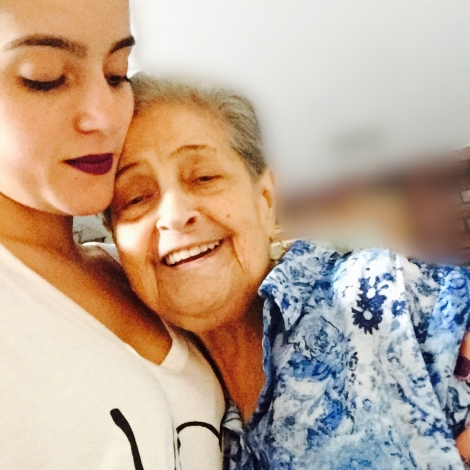 My mother never had an easy life, but she is courageous and strong. She has never let any pitfall keep her from moving forward in life. She is a hardworking, independent single mother who has loved me, supported me, and always managed to be there for me. She is a force to be reckoned with, and a beautiful person. She is everything she is today because of one very special human being, my grandmother.

As you can see, my grandmother holds a special place in my heart. She is as generous as she is kind and is blessed with the most genuine heart I have ever seen. When my mother was new to this country, young and alone, my grandmother took her in. She helped her get on her feet, made her a part of her family and never left her side, which made her and I inseparable as well. Even as I got older, I stayed just as attached to her.

In 2005 my grandmother was diagnosed with non-Hodgkin’s lymphoma. I was 14 years old, she was 76. I was confused and I didn’t understand what this meant. She received her first treatment of chemo and things started to look good. She went into remission, but shortly after, she relapsed. I remember this day vividly because it was the very first day I had ever seen my grandmother cry.

From that day on, her life has been filled with chemo, radiation and more chemo. She truly believed that “this too shall pass” and that one day she would defeat this horrific disease. In 2012 we were given more bad news. She was diagnosed with colon cancer. year ago she began to have an excessive amount of blockage in her intestines which led to ER visits every other week for practically the whole year.

Day in and day out, she believed she could fight, she believed she would win. She was the strongest person I knew. She’d been through so much pain and yet she still found a reason to smile, a reason to believe that everything was going to be okay. She’s my hero and she had defeated the odds on multiple occasions. She has shown me that it doesn’t matter what life throws at you, as long as you have faith, hope and most importantly love, you can get through it all. Even though she is no longer here, her legacy lives on. Her strength is within me forever.