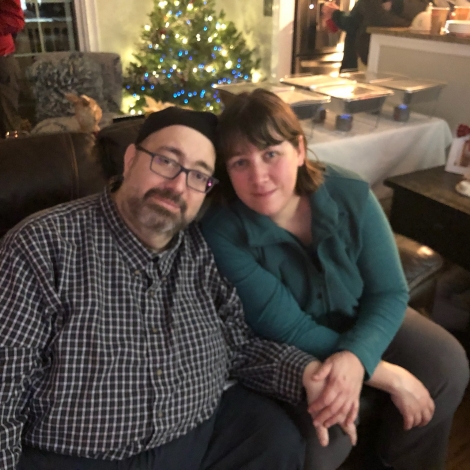 My husband's story began in July 2018, when he suddenly became ill. I rushed him to the ER. The shocking diagnosis, multiple myeloma. Three weeks prior to his hospitalization he had a physical with blood work, all was normal.

He fought a tough battle from July 2018 with three hospitalizations, which included an ICU hospital stay, a rehab and a sub-acute rehab to learn to to walk. Miraculously, he came home in November 2018. From November 2018, he was on various chemo treatments that worked and eventually, didn't work. Then, September 2019, he had a long awaited stem cell transplant. In Dec 2019, we found out that the stem cell transplant was not successful.

Unfortunately, Paul did not make it. Paul Mancuso, 50, of Wallingford, died suddenly from other complications on Monday, September 7, 2020. He was the beloved husband of Karen (Jones) Mancuso, and devoted father of Michael Mancuso. He was born in Bridgeport, January 9, 1970, the son of Domenic Mancuso of Florida and the late Susan (Colandrea) Mancuso and was a Graduate of Bunnell High School. Paul was fighting a courageous three year battle with multiple myeloma, he was in active treatment and scheduled for a promising clinical trial drug at SK NY. He was employed before his illness by Car Quest in Milford and Autopart International in North Haven. Paul was an avid fan of baseball (Boston Red Sox), hockey (NJ Devils), Nascar, and football (Denver Broncos), chopping wood, and computer gaming with his special group of online friends, and he loved fishing.

He enjoyed backyard grilling and spending time with his family and friends, traveling, and his famous pen collection. He was a family man who had an infectious personality that was larger than life itself, excellent work ethic, sense of humor and a smile that could brighten anyone's day, a huge heart, and he would help anyone out in a heartbeat. His pride and joy, heart and soul was his son Michael (who was named after one of his favorite uncles, Uncle Mike). In addition to his wife Karen, his son Michael, and his father Domenic of Florida. He is also survived by his sister and brother-in-law, Cathy and Gabe Gaudio of Florida; his brother and sister-in-law, Chris and Kathy Mancuso and her daughter Julianna of Naugatuck; his nieces, Cathy Hoffman and her husband Chris, and Julie Provonsil and her husband Mat; his great niece Chelsea Hoffman all of Florida; his special aunt and uncle William and Gloria Paul, several cousins, special cousins and family members who helped him through his health struggle: John Paul and his wife Heather, William Paul Jr., William Davidson Jr., Judy Pester, Frank Rossi, Violet Lajoie, and Al Bodnar; and his beloved dog, Salvatore. And several friends and devoted friends who were by his side: Robert and Cathleen, John and Damaris, Scott and Lauren, Drew, Mark, Dan and Jen, Sandy and Stu, Martin and Renee.

Paul was predeceased by several aunts, uncles, and cousins, as well as his mother in law Marlene Lajoie-Jones. The family would like to deeply thank those who cared for him the last three years for his multiple myeloma - Dr. Gerard Fumo, Nathan St. Louis APRN, and the entire oncology nursing department and staff at Midstate Medical Center (who saved his life in 2018), Dr. Noffar Bar and Paul's favorite nurses and the staff at Smilow North Haven. Paul may physically be gone, but his life left an everlasting imprint in the hearts and minds on those who met him.