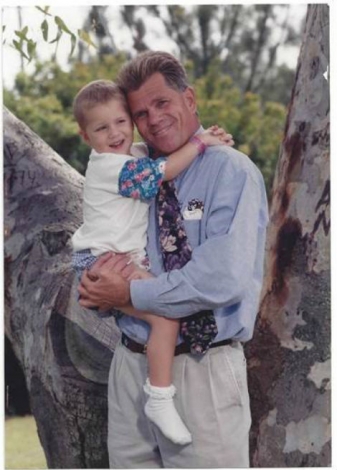 In 1995, Michael’s daughter Carley was diagnosed with acute myeloid leukemia (AML), M-7 – a  rare form of blood cancer – at just two and a half years old. For the following year, Michael and his wife, Liz, practically lived at Rady Children’s Hospital in San Diego while Carley underwent heavy chemotherapy treatment.

Michael’s journey with The Leukemia & Lymphoma Society (LLS) began about six months into Carley’s illness, when he heard about Team In Training (TNT) and thought that signing up for a marathon would be welcome therapy. Michael and his family formed a team called “Carley’s Angels,” and even though he ended up not being able to run the marathon due to a foot injury, his 12-year-old son Chris ran it for him. Carley’s Angels raised an astonishing $100,000 for LLS. The following year, the family participated in another successful marathon for TNT. Shortly after, Carley passed away on August 16, 1996.

It’s been 19 years since Carley died, and Michael has continued his advocacy and support for finding cures for blood cancers. He joined the local San Diego-Hawaii chapter LLS board and eventually sat on the national board of directors. Additionally, Michael became (and still is) chair of LLS’s Beat AML campaign, a multi-year collaborative effort with Oregon Health & Science University to fight against AML.