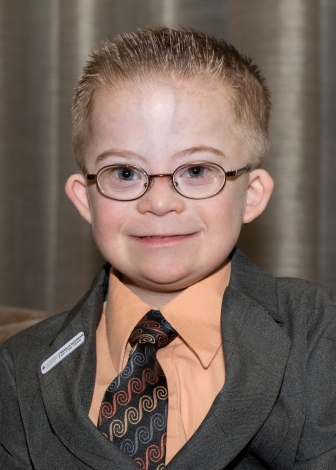 One of the Boston Bruin’s biggest fans, Liam Fitzgerald garnered national recognition as the “fist bump kid” and went on to raise almost $153,000 for The Leukemia & Lymphoma Society (LLS) to help fight blood cancers.

Liam has been through a lot in his nine years. He was born with Down syndrome and was diagnosed with acute lymphoblastic leukemia (ALL) at 3 ½. One day he was limping and within a week he wasn’t walking at all.  He was immediately admitted to the hospital for aggressive treatment that lasted for four years. There were multiple visits to the emergency room, seizures, fevers, infections and ongoing treatments and medications.

In May 2013, Liam took his final chemo treatment and "kicked cancer's butt!"

A year ago, he became an internet sensation after  a video of him fist-bumping members of the Bruins as they left the ice went viral. Dubbed the “Fist Bump Kid” he was invited to a game by his favorite player Adam McQuaid where he got to meet many players as well as the Bruins Ice Girls and Blades, the team mascot. He even went on to get his own official hockey trading card!

Liam put his newfound fame to good use when he was nominated for LLS’s 2015 Man & Woman of the Year competition for the Boston area, a fundraising event that raises significant funds for blood cancer research. Liam and family established some creative fundraising techniques, including a twitter campaign called #BumpOutCancer, which urged followers to fist bump their friends, donate to Liam’s campaign and challenge others to do the same. Liam’s “campaign” was so successful he won LLS’s coveted the Man of the Year title for the Massachusetts Chapter, an honor typically earned by adults!