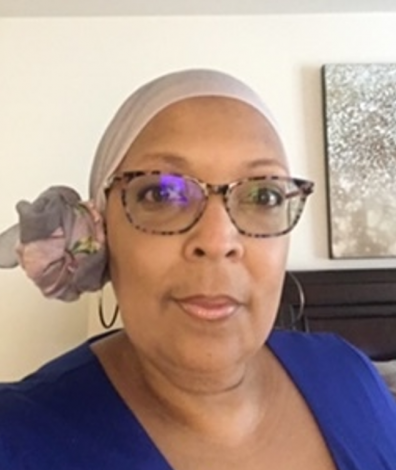 I was diagnosed with NHL on October 28, 2019. A day that I will never forget. Several months prior, around April, I was experiencing bronchitis/cold symptoms. I was prescribed an inhaler and prednisone as it appeared to be bronchitis. The condition returned in August and I was prescribed prednisone again. In October, my breathing became very labored and it was the scariest time of my life. What was happening to me? My family and friends were very concerned about how heavy my breathing was coming through in person and over the telephone. My sister in New Jersey advised me to contact my doctor first thing Monday morning, as this was the weekend, and I didn't want to go to the Emergency Room on a Saturday. She demanded that I ask for an x-ray during the doctor visit.

When I arrived at my primary doctor's office, my breathing was almost like I was going to collapse. The technician appeared very calm, but I could tell that she was concerned. The x-ray was not good. My right lung was very murky and my doctor told me I need to get to the emergency room immediately. They offered to take me but I didn't think it was that serious that I could not drive myself. Surely, I can use this time to think about what is possibly wrong. I drove to the Emergency Room and all these thoughts were going through my head - what is it? Do I need a shot? When will this go away? I arrived at the Emergency Room. Another chest x-ray. Then a scan. Now this is getting serious. The ER doctor, with the best bed-side manner possible, asked a few questions, then said you have lymphoma cancer in your right lung, it is full of fluid and we need to drain it immediately. This man just told me that I have lymphoma cancer! All I could say was ok, now how do we treat it and I am ready. He slid over a box of Kleenex and I said I don't need those, I need to know when do we start treatment, who will call me and advise and am I going home? He said no you are being admitted.

I have been relatively healthy and only needed a primary doctor - no major illnesses or treatments all these years. All I thought about was, I have to survive for my son, grandchildren and my siblings. How do I tell them that I have lymphoma cancer as I knew they wouldn't be able to handle it? Did I mention that I had moved to this state only four years ago with no family here and very few friends? My faith kicked in big time and I just believed! Thank God for an awesome church family that I had just joined a year prior; they were my strong support during this time.

Over two days, 3 liters of fluid were removed from my right lung - the worse feeling possible. I had a bone biopsy and I was advised that I had stage 4 high-grade follicular lymphoma and it was in my bone marrow. After a week in the hospital, I was finally discharged and was told that I needed to begin chemo immediately. This was my worse fear. I do not know these local doctors. I do not know the treatment center. I wanted the best treatment and just had this feeling; the facility and doctors recommended by the hospital were not for me. My hair stylist had a client that was a physician in Charlotte that was very familiar with Levine Cancer Institute and referred me. This was the best day of my life. I was immediately seen by Dr. Tamara Moyo and her team. The consultation with Dr. Moyo further strengthened my determination to live and not die. I knew this was the place that I will have my treatments and Dr. Moyo would be my oncologist. The thoroughness of the treatment at LCI including the nurses, the pharmacist, the nutritionist, the oncology nurses, the receptionist -- all of them where instrumental in my journey. LCI also provided me with LLS community information and tons of resources and knowledge to help me along this journey.

My chemo treatment of Rituxan started November 21. I had no adverse reactions from the Rituxan as my WBC and platelets were always fluctuating. In January, in addition to Rituxan, I was also administered the Neulasta shot. I kept pushing and it was my faith that kept me going. On March 11, 2020, I had my last chemo treatment and I rang the bell. On April 23, I had another pet scan and it showed that I am in complete remission! This journey was not just for me but for me to help someone else. My faith, my loving family, friends and church really supported me. The strength that I had during this journey at times boggles me and others, but I knew that God had prepared for this time and to share my story. I am thankful for my healing even though I know there are annual tests to still to be completed; but I just believe!