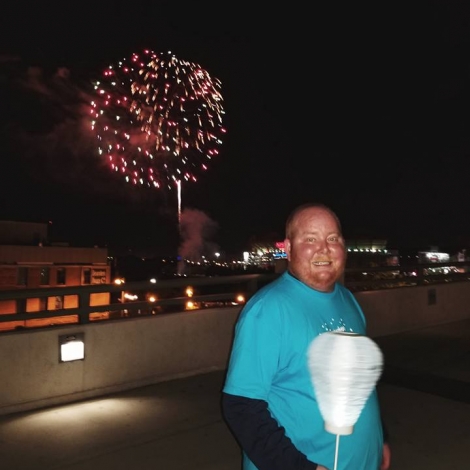 In May of 2016 my husband Josh was experiencing abdominal pains. He was so sick with nausea, vomiting, and diarrhea. He went to see his doctor and was told it was probably a stomach bug but then it continued to get worse. He went back a couple of days later and they did an MRI. On June 2, 2016 we got the results from the MRI and he had a bowel blockage then there showed signs of cancer. After a couple of days of him being in the hospital treating the bowel blockage we finally were told a diagnosis. The cancer Josh had was rare, extramedullary acute myeloid sarcoma.

After getting the news the oncologist at the hospital had never treated that type of cancer before he suggested Josh be transferred to Centennial Hospital since the oncologist there had treated this type of cancer in the past. After the transfer Josh was right where he needed to be. They explained to us Josh would need a bone marrow transplant. We had his siblings tested and they only came back 50/50. But the hospital helped us find a potential donor. A perfect match at that.

They had the same blood type and was a 100% match. Josh then started his rounds of chemo where he was in the hospital for many months. It was so hard on him being away from then our two-year-old son. Before the transplant Josh got to come home for a couple of weeks. He got to celebrate his birthday, our sons birthday, & mine. It was nice to have him home for the time being. They scheduled for him to go back September 2016 to the hospital and start the chemo to prepare for his bone marrow transplant. September 23, 2016 was the big day, the day Josh would receive his bone marrow (Day 0) from a selfless person.

I remember that day like no other they brought the bone marrow in a cooler. We all laughed but deep down we were all so worried & scared for Josh. It took most of the day to receive the bone marrow through his IV. But Josh did great! From then on it took weeks to graft. He got released from the hospital October 26, 2016. With his counts still being low we had to keep everything cleaned and only a handful of people could visit.

His day 100 came on January 1, 2017 – new year, new Josh. He had many ups and downs as you can imagine and he continues his battle till this day with Graft vs Host. Josh has stayed positive throughout his journey. He is a true hero to us all! The past two years we have walked at Light The Night and we will continue to every year for him and all the others effected by this horrible disease. This year will be a bit different for the walk as we will get to meet Josh's donor for the first time. Him and his wife and kids will be walking with us. It will be a special night for us. I would like to thank from the bottom of my heart the doctors and nurses at Sarah Cannon, Josh's donor Steven, and to number 1, God for being by Josh's side throughout it all. Also thank you :light The Night for putting together the walk.