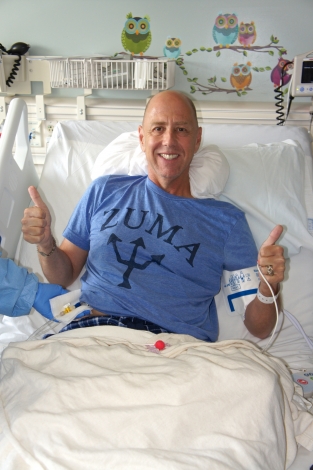 Josh Feldman, 55, underwent multiple treatments for lymphoma, but continued to relapse. A little more than year ago, he was treated with CAR-T immunotherapy at UCLA (Kite Pharma’s clinical trial Zuma 1 supported by LLS). And within a few weeks he had a complete response to the treatment. On September 12, 2017, scans showed that he remains cancer-free 15 months later.

In 2010, Josh, age 49 at the time, was with his wife on their honeymoon when he noticed a bean-sized lump on the back of his neck.

After being misdiagnosed twice, his dermatologist, Dr. Alan Bookin, conducted a biopsy. Josh was diagnosed with follicular lymphoma. For several years he was treated with an array of different therapy regimens: R-CHOP (a combination of ritiximab and chemotherapy), an immune checkpoint inhibitor called nivolumab, and a targeted therapy called idelalisib.

Through most of these treatments, he suffered from severe side effects. Despite all of these therapies, in September 2015, a new biopsy revealed that Josh’s follicular lymphoma had transformed into diffuse large B-cell lymphoma.

At that point doctors felt that a stem cell transplant was his final conventionally approved option. His brother was a half match to be his donor.

He began receiving a regimen known as RICE (rituximab, ifosfamide, carboplatin, etoposide). But Josh was reluctant to undergo the risky stem cell transplant procedure and began conducting research about other experimental treatment options. He learned about clinical trials for a revolutionary treatment called CAR-T cell immunotherapy.

After learning he was not able to achieve a remission that would have made him eligible for the stem cell transplant, with the help of LLS’s Clinical Trial Support Service Director Peg McCormick, RN, BSN, MA, and his oncologist, John Timmerman, M.D., of UCLA Medical Center, he enrolled in a clinical trial conducted by Kite Pharma.

In addition to receiving help from LLS to enroll, he later realized that LLS provided $2.5 million in funding for this innovative clinical trial.

In June 2016, he received the CAR-T cellular treatment. Josh suffered no major side effects from this treatment. Today, the 55-year-old professional photographer and avid surfer is happy, healthy and cancer free.