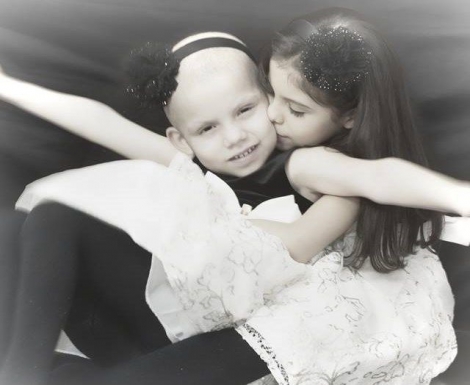 Ciara and Liliana were born a few years apart and grew up in a happy home with their mother, Heather and father, Danny. I would describe Ciara, age 7, and Liliana, age 5, as always smiling, always playing, always pretending, always hiding and always giggling. Happiness was contagious when you were around them. Both girls had big brown eyes and long brown hair and their beauty was only matched by their genuine kindness.

In February of 2015, Liliana was complaining of pain in her leg and was more tired than usual. After a few days, she had a small temperature and Heather was advised to take her to the hospital for a blood test. The blood test results indicated that Liliana had acute lymphocytic leukemia (ALL). Not only was she diagnosed with ALL, but further testing indicated she had the highest risk and most aggressive form of leukemia called Philadelphia Chromosome Positive (PH+ ALL).

On February 21, 2015, their world as they knew it would never be the same as their lives spun out of control. Heather and Liliana never went home that day and wouldn’t for months. Heather never went back to work and Lily stopped attending kindergarten. Liliana’s life was shattered as she was instantly thrust into an extensive regiment of intense chemotherapy, painful procedures and isolation, while her heartbroken mother stood by watching her suffer.

After a few months, Lily was finally able to go home while continuing her chemo, blood transfusions and procedures at the hospital for a week each month. Though Ciara and Lily had seen each other occasionally in the hospital, they were finally together again. At only 7 years old, Ciara immediately began taking special care of her 5 year old sister and it was having an instant effect on Lily. When Lily was resting, she would lay beside her. Their love for each other was Lily’s best medicine.

By September of 2016, while still undergoing chemotherapy, Liliana amazingly wanted to return to school, was taking piano lessons and also starting ballet. She wasn’t feeling well some of the time but she managed to participate and excelled in all of her activities. Liliana was not the same child she was before February of 2015. She now was fierce! Ciara is now 9 years old and Liliana is turning 8 this summer. Lily has performed on the piano at her school play, danced in two recitals and made the honor roll. Liliana is six months from completing her treatment and is in remission. We are celebrating their lives in telling their story.