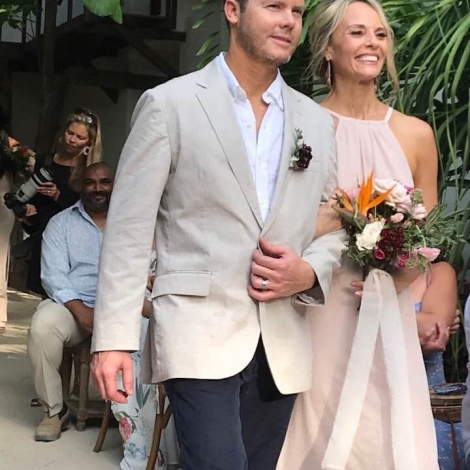 In the fall of 2008 my wife and I got married. Shortly after returning from our honeymoon, I began developing pains and weakness in my joints. This continued through the holidays and I sought medical attention when the pain in my shoulders and hips became unbearable. After inconclusive X-rays and unsuccessful Cortisone shots, I began developing a pain in my abdomen around Christmas. The joint pains I wrote off as working out too hard and the abdomen pain I concluded was an ulcer.

In January, with continued pain and weakness, I had some friends and coworkers make comments to me that I looked skinny and one night after leaving most of my dinner plate untouched because I felt full; my wife encouraged me to go see a doctor. On February 12, 2009 I went to visit the doctor who felt my abdomen and detected a large mass. He seemed concerned and ordered me to the lab immediately to get blood work done. That evening I received a call from him to tell me that I had a form of blood cancer called chronic myelogenous leukemia (CML). I went numb. The mass in my abdomen was my enlarged spleen and the fatigue and pains in my joints were a result of the cancer cells ravaging my body. The condition of night sweats I had in the previous weeks was not a result of my wife cranking up the heat in our apartment…it was cancer.

The most difficult thing I have ever had to do in my life followed that call when I had to walk in the front door and tell my wife of 5 months that I had blood cancer. This sent us into an emotional spiral. My wife and I did not know what the future held for us. How long did I have to live? Am I going to die? If I survive, will we ever be able to have kids?

The information on CML was that it was rare and there was no safe cure; however, there was a new form of treatment that gave hope. The following day on Friday the 13th, of all days, I began this treatment which is called Gleevec. It is a target therapy drug that was developed with the fundraising support of TNT and LLS which I quickly became interested in to find more about. With the combination of disease, bone marrow biopsies and treatment side effects it got worse before it got better. At my low point I lost 20 lbs and the pain was deep into my bones. I had always been athletic so one day when I was completely out of breath from an exhausting and painful walk down the street, I recall turning to my wife and saying , “We will beat this and I will put myself to the test physically to prove it. The treatment worked and brought my blood levels back to normal within a few weeks.

Nine months my body adjusted to the daily treatment and within a year of being dx I hit remission in the spring of 2010. In addition to celebrating my remission, exercise helped me cope with the side effects so I decided it was time for that physical challenge. I chose to do a sprint triathlon in Monterey and was joined by my close friends. I aligned myself with TNT for 2 reasons; to get the training I needed and fundraise for LLS in hopes that someday we can find a cure and I can come off my daily treatment of Gleevec. Swimming was my fear, not because I didn’t know how to swim, but because… I didn’t know how to swim.

Sure I spent many a summers in the ocean, pools, and lakes but you put goggles on in open water with 50 other people swimming and kicking over you... it’s a whole different ballgame. Not only did I complete the event and fundraising goal, but my body and mind felt great! I continued to exercise and build upon my new found love of triathlon and TNT. With the camaraderie, and support of the coaches, fellow teammates, family and friends, I was inspired to go on and complete 13 triathlons including a half ironman and the Escape from Alcatraz. The success of my treatment even allowed my wife and I to fulfill our dreams of having children, as we are the proud parents of two young healthy boys. Taking Gleevec every day has become routine, as I will need to remain on treatment until a cure is found, but I am fine with that, for I have a beautiful family thanks to ”the G”. I continue to indulge in the outdoors (especially the beach), painting, skiing, sports, and spending time with my family. I can enjoy all those things thanks to many selfless participants/donors in TNT and LLS who have helped save my life and others. I am so grateful to my loving wife and family who have supported and stuck with me through it all. We have a saying in TNT that with the money raised, we are racing to save lives, but as in the case of my sons, we are helping to create them. Live Life, Smile Often!