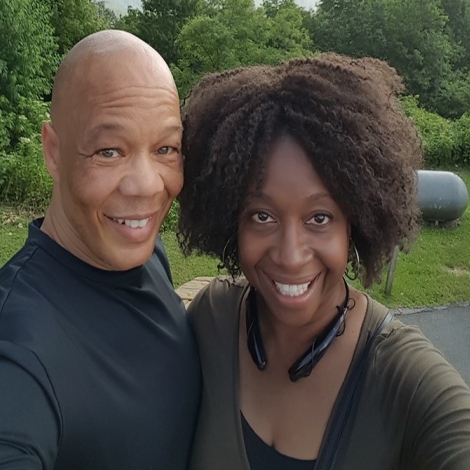 Our biggest challenge to date was the year my husband Calvin and I were married.  Our wedding was in June 2003. That November, I began to notice bruises on my feet and ankles. I showed them to Calvin and he urged me to get it checked out. My primary care doctor thought it was a reaction to a sulfur antibiotic I was taking and sent me home with a steroid prescription.  I developed mouth sores and became very weak.

After going back and forth to this doctor, I finally asked Calvin to take me to ER the week before Thanksgiving.  I figured I’d be there for a few hours, but after a week, it was discovered that I had acute myeloid leukemia (AML).

We were told that I couldn't go home - I would be in the hospital for two months, then I would probably need a bone marrow transplant and would have to move to Chapel Hill for six months for that process.

So, as I was being transported from Presbyterian Hospital in Matthews to Presbyterian Hospital Main in downtown Charlotte, my wonderful Calvin went home to get his clothes, the iron and ironing board, the stereo system and he moved with me into that room in the bone marrow ward.  He worked half-days and spent the rest of his time with me.

I underwent aggressive chemotherapy and by God’s healing power, a complete remission was achieved.  I was discharged on Christmas Day, our first Christmas, in only 33 days!  I've been cancer-free ever since.