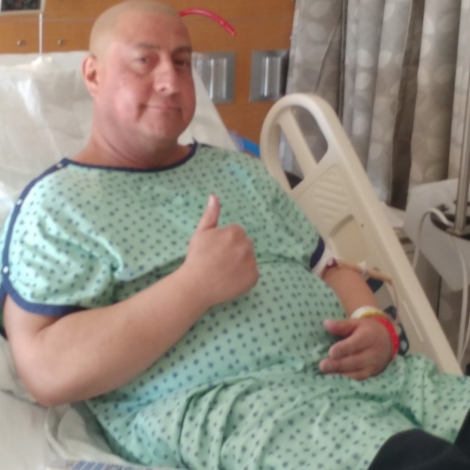 On August 2, 2018 I took my husband Joe for outpatient surgery to repair a torn cartilage on his left knee, he was prepped up and ready to go, when his orthopedic surgeon came in and told him his surgery was cancelled, he showed us his blood work and talked about possible cancer. We were advised to go directly to his primary care doctor, as we drove to the doctor’s office our heads were spinning as we tried to comprehend what we were just told.

During the next few weeks he underwent a painful bone marrow biopsy and lab work, while waiting for the results all he could think about were his boys (ages 24 and 7) and that he needed to be strong for them.

On August 17, 2018 it was confirmed and Joe was diagnosed with AML. He was admitted to a City of Hope Satellite Hospital in Upland, California for his first round of induction chemotherapy. When we met his oncologist at the hospital he told us that his initial blood work showed 30% blast cells and within 2 weeks the blast cell count had increased to 92%. A second round of chemo was needed in late October and in November Joe was sent to the main City of Hope Hospital in Duarte, CA for a consultation.

He was told that he had a certain mutation in his blood and would need a stell cell transplant. His siblings were tested first and his brother was found to be a perfect match. On Christmas Day he checked into the hospital for his transplant.

Joe was able to come home on April 5, 2019 and continues to fight every day towards better health. As the 1 year anniversary of his diagnosis comes up I can’t help but think how much he endured in the last year.

The infections, loss of kidney function, blood clots and all the other symptoms that come with treatment. I admire his strength and the strength of all others who are fighting cancer. In October we are participating in the Light The Night Walk for the first time and can't wait to celebrate the victories as well as pay tribute to those who have lost the fight.