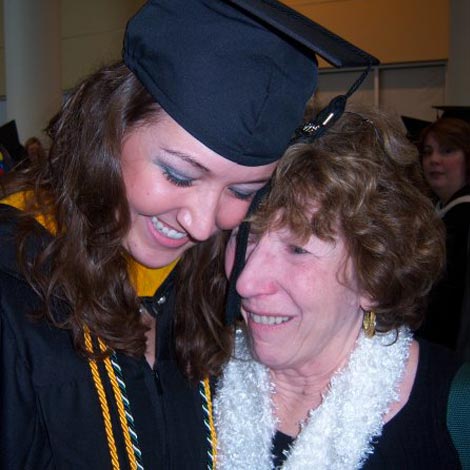 I would first and foremost like to introduce you to a most special lady.  My Nana.

She was my grandmother—my dad’s mom. Her name was Donna.  She was diagnosed with breast cancer in the 1980s when she was 45 years old.  In 1993, the five-year mark of her breast cancer survival, she was diagnosed with leukemia and was given three months to live.  Instead of accepting this fate, she went to the University of Texas MD Anderson Cancer Center and proceeded to revolutionize the cancer industry by taking part in multiple trials of experimental drugs to cure leukemia.  She was the one patient out of 20 to survive in nine different experimental treatment studies, none of which were FDA approved at the time.

One of these drugs was imatinib, which has forever changed the survival rates for chronic myeloid leukemia patients.  After years of fighting, she was deemed cured. She was featured in publications and recognized as an honored teammate for a Team In Training team in the late 1990s.  She was able to see three more grandchildren come into this world and grow up.  She saw six grandkids graduate high school and five graduate college.  She watched as three of her grandchildren got married and started their own families.  She got to know two great-grandchildren.  She moved across the country to enjoy life in the mountains and went on countless gambling escapades to Lake Charles and Las Vegas.  She lived.

She passed away from complications due to severe brain atrophy from all of the experimental drugs that saved her life and countless others.

From the time she was diagnosed, Nana went on to live for 259 months.  Considering she was given three months to live at the time of her diagnosis, this astounds me every time I think of it.

Donna Pitlik has impacted more lives than most of us could ever hope to touch in multiple lifetimes.