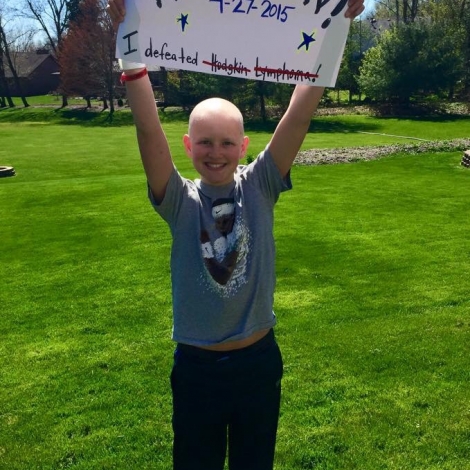 On June 17, 2014, 12-year-old David Stim visited his pediatrician's office to have a routine school physical. During the exam, the nurse practitioner noticed an enlarged lymph node on the right side of his neck and surmised that it probably due to a reaction to something, as is almost always the case in pediatrics. Since David had been treated for strep throat the month before, there was not much cause for concern.

A busy summer went by, and the node did not appear to change. In October, David was treated for an upper respiratory infection, and again the pediatrician was not overly concerned about the node, surmising that it was again likely a reaction to a recent infection. Just to be sure, after David's infection cleared, his pediatrician recommended he return for blood work and a chest x-ray done to rule out something more serious. David's family was relieved when this testing revealed no abnormalities or indication of leukemia. Believing that he was healthy, they returned to their daily lives, thankful that David was okay despite still not having an explanation for his enlarged node.

However, David's mom, a registered nurse, was unsettled. She took David to his dentist to rule out an abscessed tooth or other dental explanation -- negative. David was referred to a pediatric surgeon for further evaluation and possible biopsy. Upon examination and further testing, the surgeon originally believed that David's neck swelling might be due to an enlarged salivary gland, so she sent David for a CT scan and ultrasound. These tests came back negative, and a biopsy was recommended. Previously, David's family had not been quick to rush into a biopsy, knowing that it required general anesthesia, and was a delicate operation close to vital nerves and blood vessels in the neck. David's mom vividly recalls the surgeon's recommendation on the telephone, "it is probably best, at this point, to go ahead with the biopsy just to rule out any very remote possibility that this is something serious like lymphoma."

On December 5, 2014, David underwent an excisional biopsy of his right deep posterior cervical lymph node. It was a long weekend waiting for biopsy results, which were far from what anyone had expected over these many months of investigation...David had Hodgkin lymphoma. David recalls the day he learned of his diagnosis:

"I was upstairs doing my homework, and the doctor called. My dad is a nephrologist, and was able to look up my biopsy results himself. He already knew."

Four days after Christmas, David started chemotherapy. He underwent an intermediate risk protocol of four cycles of chemotherapy, each cycle lasting 21 days, at Lurie Children's Hospital/Clinics at Central DuPage Hospital in Winfield. David, a remarkable kid known for never succumbing to the challenges thrown his way, battled his cancer for four trying months. His mother was constantly by his side fighting with him, having been granted a leave of absence from her job as a school nurse in order to care for him. David's chemo was successful, and on April 27, 2014 a PET scan officially determined that David was in complete remission.

David remarks on his remission saying: "I was overjoyed. I wasn't as overjoyed as I should have been because I had this sense that what if it comes back. I feel like that will always be in the back of my mind."

Now 13 years old and cancer-free, David reflects back on hardships he went through just a few months ago. Thinking back to the time he found out he had cancer, David says, "at first, it didn't affect me much; I just thought it'd be a little thing -- I didn't think it'd be too big of a deal. I was sad and shocked and I didn't expect it."

Nonetheless, upon hearing his diagnosis, David remained resilient, determined not to let cancer change his life. He continued to attend school with his classmates as much as his body would allow. David remarks on his journey with unbridled optimism saying: "Know that eventually the suffering will be over. If your life goes down, it will always go back up."

David's profound words resonate with anyone going through a struggle -- a reminder that there is, indeed, always a light at the end of the tunnel. Today, like most 13-year-old kids, David is focused on being a kid -- he just completed seventh grade, is an A student, and enjoys playing baseball, tennis, and riding his longboard (skateboard). Not only is David an athlete, but he's a gifted musician. David plays the violin for his school orchestra and despite chemotherapy (and a hospital stay two days earlier), was able to help his orchestra place first in a state competition this past April.

David's mother gives sound advice when it comes to facing difficult diagnoses like her son's. "Follow your gut instincts, and never give up searching for answers if something doesn't seem right. Be your child's own best advocate by educating yourself." Having a wealth of new knowledge after dealing with David's cancer, she adds the importance of taking your child to their pediatrician annually for a wellness exam. She is thankful that she did!

David is now the Light The Night Honored Hero for Rockford, Illinois.