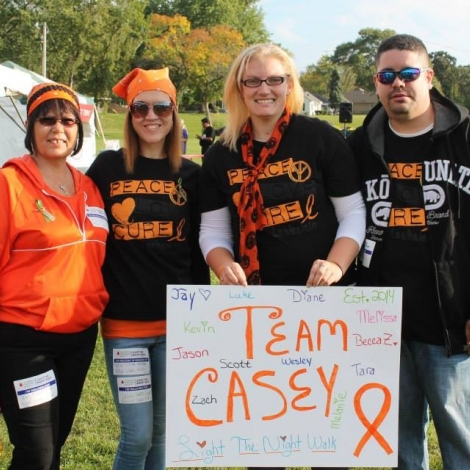 It was in May, 2014 that 24-year-old Casey Moore began experiencing her first symptoms of chronic myeloid leukemia (CML). For a week straight, Casey had been vomiting every day and was losing a significant amount of weight. This was unusual, as prior to her symptoms, she considered herself a happy, healthy woman focused on her relationship and career. At the time, she was living with her boyfriend and working full time in a chiropractic office -- with no apparent signs of an illness.

Casey's vomiting episodes prompted her to take a home pregnancy test, which turned out to be negative. Still feeling horribly sick and worried about her health, Casey went to the emergency room to have a doctor evaluate her symptoms. At first, the doctors thought she might have a 10- to 14-day virus, which would explain her vomiting and weight loss. However, after doing blood work, the doctors found her blood cell counts were as high as 250,000 when they should have been in the range of 6-11,000. Additionally, a bone marrow biopsy revealed abnormalities. On Friday, May 17, 2014, Casey was diagnosed with CML.

That following Monday, Casey started a regimen of Tasigna, an oral chemotherapy funded by LLS, that she was expected to take for four to five years. Her doctor also told her that she may not conceive until two years after her remission.

Casey happened to stumble upon The Leukemia & Lymphoma Society (LLS) after her doctor recommended the organization to her. Casey joined the Light The Night Walk and met Denise, whose mother was diagnosed with leukemia, and Kristen, who herself was diagnosed with leukemia. Casey's involvement with LLS has given her a new perspective on her diagnosis. Casey is thankful for her amazing support group at LLS, and she actively wants to raise awareness about blood cancer by telling her story. Casey wants people to know that it's so important to "Live life to the fullest; leukemia may not take your life away but something else could." Casey's positive outlook on life is inspirational to all those who have survived or are still battling cancer.