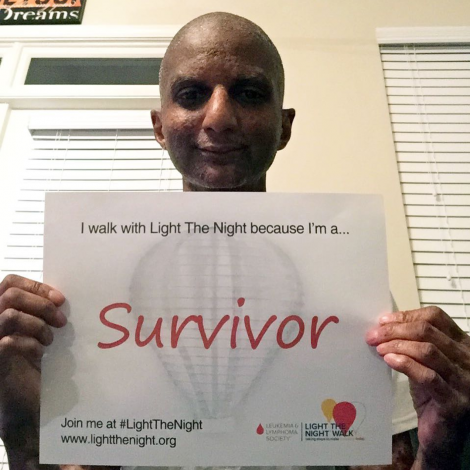 In 1985 at four years old I was diagnosed with chronic myeloid leukemia (CML). Luckily, my sister who was two at the time was a bone marrow match so I underwent a bone marrow transplant. The house of chemotherapy and radiation left me nauseas to the point I couldn’t bear the smell food. But thankfully, I was soon in remission.

Several weeks later, I developed graft vs. host disease. My feet grew so sore that I could only walk on a fluffy rug. Fluid collected in the back, my muscles tightened and my lungs crackled with infection. My mom took me to the doctor one day and I was unable to walk or cry. I also started to lose my skin pigment, it gradually came off just like bad dandruff.

I was eventually put on an experimental drug called Thalidomide which reversed the destructive process of the disease. Two years later, we were in the doctor’s office and my doctor gave us the news that I had relapsed. I remember my mom starting to cry. Me being a kid and not knowing any better, my words to her were “Don’t cry mom, people who relapse die, I’m not going to die”. Here we were again, back in the hospital.

Another transplant, more chemo, more radiation— the second time around was rough. At one point, machines were doing almost everything for me. Doctor’s didn’t know what else to do. But the fight in me refused to die, and the God above me said it wasn’t my time yet. One day, I miraculously woke up and pulled through and was once again in remission.

Now here I am today, 30 years cancer free and last month I celebrated my 36th birthday. I have to give so much thanks to all the doctors, nurses and staff at the hospital who helped me get through and to LLS for all their research that is responsible for my and many others survival today.